Introduction to Arduino for sensors, robotics, and drones

This is a guest post written by Roy Green of The Sensor Shack, a free online resource for engineers to learn about different types of industrial sensors for measuring temperature, pressure, flow rate, displacement and more.

Arduino boards are a range of low cost open source microcontrollers ideal for DIY projects including robotics, drones and environmental monitoring. Although their processing power and RAM are limited, Arduinos have the advantage of being easy to program (there are many free resources and extensive libraries) and include a large number of I/O pins (input/output pins). The I/O pins enable the Arduino to control actuators, receive sensor inputs and communicate with external devices. The types of Arduino pins include: 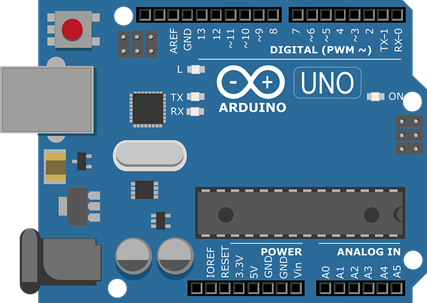 There are many different Arduino boards to choose from, descriptions of which can be found on the official Arduino website https://www.arduino.cc/en/main/products. Differences between them include their physical size, the number and type of ports, processor speed, memory, and operating voltage (either 3.3 V or 5 V). There is a wealth of information on the internet to aid in selecting a board, though the Arduino Uno is generally considered a good entry level board. We will now look a few of the basic commands for programming Arduinos. More information about each command can be found on the Arduino website https://www.arduino.cc/reference/en/#functions.

We will now look at a simple code using several of the above functions. The example code reads the analog voltage from 2 temperature sensor breakout boards, calculates temperature and prints the data to the serial monitor. Every Arduino code has two sections: void setup() and void loop(). Code entered into void setup() runs once as soon as the Arduino is switched on. Code entered in void loop() runs in a continuous loop. 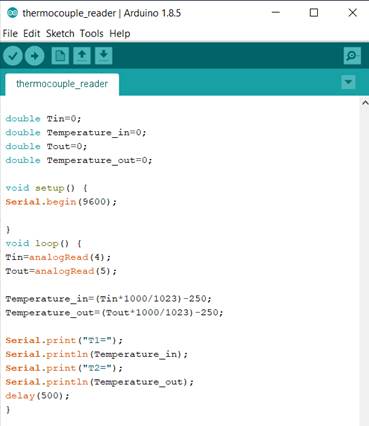