There are many ways to communicate between a C# client and a C# server. Some are robust, others not so much. Some are very fast, others aren’t. It’s important to know the different options so you can decide what’s best for you. This article will go through the most popular technologies today and why they got to be so widely used. We’ll talk about REST, gRPC, and everything in between.

I’d like to have full Intellisense of course. When I click server and . I want Visual Studio to show all controllers. And when I click CalculatorController and . , I want to see all actions. I also want top-notch performance, very little network payloads, and bi-directional communication. And I want a robust system that deals with versioning perfectly so I can deploy new client versions and new server versions without friction.

Is that asking for too much?

Note that I’m talking here about a stateless API. This is equivalent to a C# project where there are just two types of classes:

Having a state in an API introduces complexity and that is the root of all evil. So for the sake of this article, let’s keep things nice and stateless.

REST API appeared in the early 2000s and swept the internet by storm. It’s now, by far, the most popular way to create web services.

There’s a standard called RESTful API that defines the following rules (which you don’t really have to use it):

If you’re not familiar with REST until now, the above explanation is probably not going to cut it, so here’s an example. In .NET, there’s built-in support for REST. In fact, ASP.NET Web API is built to be a REST web service by default. Here’s how a typical client and ASP.NET server looks like:

REST is pretty damn convenient, but it doesn’t come near the optimal scenario. So let’s see if we can make this better.

ReFit is not an alternative to REST. Instead, it’s built on top of REST and allows us to call server endpoints like they were a simple method. This is achieved by sharing an interface between the client and the server. On server-side, your Controller will implement an interface:

Then, on client side, you’ll need to include that same interface and use the following code:

It’s as simple as that. There’s no need to run difficult automation or use any 3rd party tools beyond a couple of NuGet packages.

This gets much closer to the optimal scenario. We now have IntelliSense and a strong contract between the client and the server. But there’s another option, which is even better in some ways.

Like ReFit, Swagger is also built on top of REST. OpenAPI, or Swagger, is a specification of a REST API. It describes a REST web service with simple JSON files. These files are the API schema of the web service. They include:

This JSON file is essentially the contract between the clients and the server. Here’s an example of a swagger file describing a web service called Swagger Petstore (I removed some parts for clarity):

Let’s consider the consequence of this. With a JSON file like the one above, you can potentially create a C# client that has complete IntelliSense. After all, you know all the paths, operations, what parameters they expect, what are the parameter types, what are the responses, etc.

There are several tools that do just that. For the server-side, you can use Swashbuckle.AspNetCore to add Swagger to your ASP.NET and produce said JSON files. For the client-side, you can use swagger-codegen and AutoRest to consume these JSON files and generate a client. Let’s see an example of how to do this:

Adding Swagger to your ASP.NET server

Start by adding the the NuGet package Swashbuckle.AspNetCore. In ConfigureServices, register Swagger generator:

In Configure method of Startup.cs add:

Finally, the actions inside the controllers should be decorated with [HttpXXX] and [FromXXX] attributes:

It’s as simple as that for the server-side. When you run the project a swagger.json file will be generated, which you can use to generate the client.

Generating a Client from Swagger with AutoRest

To start using AutoRest, install it with npm: npm install -g autorest. Once installed, you’ll need to use AutoRest’s command line interface to generate a C# client from the swagger.json file. Here’s an example:

This will produce a folder GeneratedClient folder with the generated C# files. Note the namespace and client name are overridden. From here, add this folder to your client project in Visual Studio. 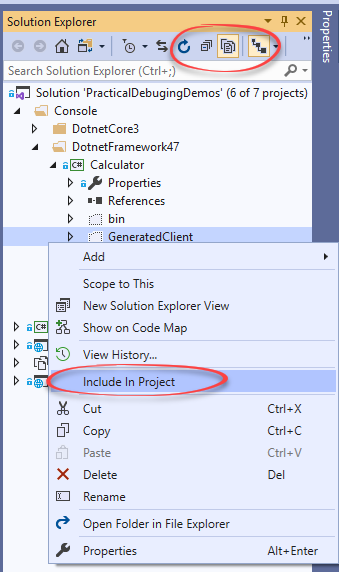 You’ll need to install Microsoft.Rest.ClientRuntime NuGet package because the generated code depends on it. Once installed, you can use the API like it’s a regular C# class:

There are some subtleties which you can read about in AutoRest’s documentation. And you’ll need to automate that process, so I suggest reading Patrik Svensson’s tutorial for some good advice as well as this article by Peter Jausovec.

My issue with Swagger is that the JSON file is created at runtime, so this makes it a bit difficult to automate in your CI/CD process.

Traditional REST vs Swagger vs ReFit

Here are a few points to consider when making your choice.

But before deciding anything, check out a 4th option that has nothing to do with REST.

gRPC (gRPC Remote Procedure Call) is an open-source remote procedure call system developed by Google. It’s a bit like REST in the way that it provides a way to send requests from a client to a server. But it’s different in many ways, here are the similarities and differences:

There are two ways to use gRPC. For .NET Core 3.0 there’s a fully-managed library called gRPC for .NET. For anything under that, you can use gRPC C#, which is built with native code under the hood. That doesn’t mean gRPC for .NET replaces gRPC C#. Let’s see an example with the newer gRPC for .NET.

Server-side of gRPC for .NET

This is not a tutorial, but more of a general idea for what to expect. Here’s how a sample Controller will look like in gRPC:

You’ll need to add the following in Configure in Startup.cs:

The API is described in a .proto file, which is part of the project:

This .proto file is added in the .csproj:

Client-side of gRPC for .NET

The client is generated from the .proto files. The code itself is very simple:

gRPC sounds like a sweet deal. It’s faster and simpler under the hood. So should we all change from REST to gRPC? The answer is that it depends. Here are some considerations:

From my impression, working with gRPC and ASP.NET is still not great. You’re going to be better off with the mature support for REST. As far as a contract-based communication, it’s nice, except that you have similar alternatives in REST which we already talked about: Swagger and ReFit.

The biggest advantage is performance. In most cases, according to these benchmarks, gRPC is much faster. Especially for big payloads, for which the Protobuf serialization really makes a difference. This means it’s a huge advantage for a high-load server.

Transitioning from REST to gRPC in a big ASP.NET application is going to be hard. However, if you have a microservices-based architecture, then this transition becomes much easier to do gradually.

Other ways of Communication

There are some other ways of communication which I  didn’t mention at all, but it’s worth knowing these exist:

17 thoughts on “C# to C# Communication: REST, gRPC and everything in between”