The Joys of Office Politics 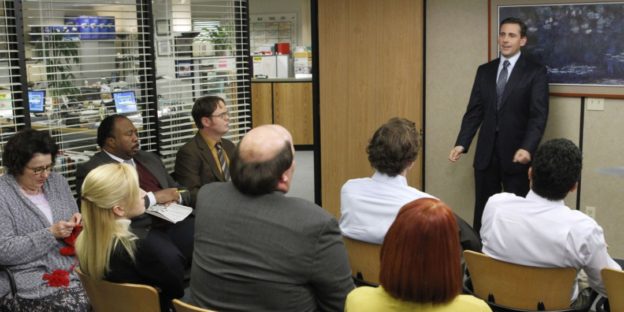 Office politics always sounds kind of negative, right? Like that bad side effect that you have to suffer in your job. Or like a constant obstacle to any good thing that you can achieve. I don’t think I ever heard someone say “I enjoyed the office politics in that place”.

Somehow, when a company surpasses a certain amount of employees (say 30), office politics becomes a thing. All of a sudden, instead of every employee in the company having the same goal in mind, the various teams develop individual goals.

The effect is probably seen best in meetings. A careful observer will notice that some attendees are more interested in being heard, seeming smart, and promoting personal agendas instead of achieving the meeting’s objective.

Everyone who worked in a large company knows that the political scene is so thick that you need an incredible effort in order to get something done.

The whole thing sounds very counter-productive. Can’t we just prevent this from happening? Can’t we just work together to achieve our common goal?

Apparently not. Moreover, the more the company grows, the worst it gets. But, this post is called The joy of office politics, so where is the joy exactly? Well, here’s my advice on how to enjoy office politics:

If you’ve worked in a small company before, you’re probably used to few meetings, good ideas being accepted quickly and overall efficiency.

Not so In a big company. For overall organization and everyone being on the same page, you will need endless meetings, Gantt charts, project managers and so on.

Any change in direction requires a whole lot of people to agree, schedules to be changed, Gantt charts to be updated and project managers convinced. It’s just not as easy to make something happen, so don’t expect things to be as efficient as in that startup you worked for.

2. Extend the definition of Office Politics

Office politics involves personal agendas, scheming and endless meetings with no substance. But I don’t think that’s a fair definition for it. At least not a full one. Office politics also includes:

Consider the satisfaction you can get when you have a great idea to increase efficiency, and you were able to convince a whole bunch of people to work together for that common goal. Now think of how satisfying it might be sometimes later when your initiative pays off.

Consider the joy of achieving great working relationships with the other team to the point that you are helping each other out instead of fighting and blaming. This is all office politics as well.

3. Consider that everyone is still working for the best of the company

It’s easy to think that most employees and managers just care about their self-interests and personal growth. But, it’s definitely not the case for most people. Most employees want to do a good job. People like to think they are good at what they do and that they are contributing.

So even though people are promoting their own agendas, stealing credit and playing dirty… deep down they all like to think they are doing a good job.

It’s sort of a comforting thought that makes me think that office politics is not that bad.

4. Take office politics as a challenge and get better at it

Challenges can be fun, especially when you overcome them. Office politics is no different.

Like with most things in life, office politics is a learned skill. You can get better at it and once you do, playing that game becomes much more fun.

Trust me when I tell you that it can be very satisfying to be able to influence a big organization. For example, imagine yourself in a very important meeting, being able to convince management that you need to pause work for two weeks to develop appropriate tests before moving on.

I won’t try to teach you to be better in office politics, there are other articles for that. But my general advice is to be friendly, respectful and helpful to everyone while building professional trust. Oh and always steal credit 😉