While the previous statement might be true to startups, there is still an incredible amount of software development happening in desktop applications. Consider programs like Excel, Adobe Photoshop and the Chrome browser.

Besides similar existing monstrous applications, there are many good reasons to develop new desktop applications. Some of those are:

Developing for Desktop is great for a lot of reasons. You get to work with excellent mature technologies that stood the test of time. The debugging is as best as it comes. Arguably, desktop apps have less complexity and development is easier. In short, you’re in luck!

Like with all software, there are many different ways to go when developing desktop applications. This includes different programming languages, frameworks, and architecture decisions. All of which will differ according to the individual needs of your product.

This article will show 9 of the most important things that need to be considered in advance or at the start of development. Considering this in early stages can save you rewriting code, doubling back in technology or choosing something that you will later regret but unable to replace.

The first order of business is chossing your UI technology. There are many great UI frameworks for Windows, each with its own advantages and limitations. Most technologies will limit you to a certain programming language, which should be an important consideration according to your team’s capabilities.

To help you choose, you can look at Telerik’s survey of 2016 where developers were asked: “What Technology would you choose if building for Windows Desktop?”. The results are as follows:

According to this Survey, WPF and WinForms completely dominate the market. Also, it’s pretty amazing that WinForms remains so very popular after all those years.

Telerik’s survey might not represent the whole market though since Telerik customers are mostly in the .NET Controls space. It’s also a bit outdated. So another way to check for popularity is a simple research in StackOverflow. I searched the Tags of all the technologies and compared them. Here’s what I found: 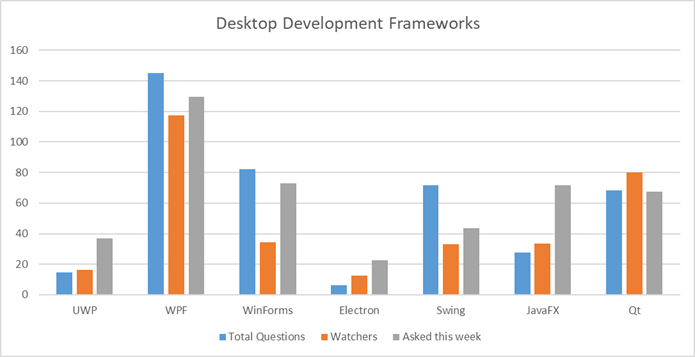 You can argue that the amount of questions does not represent the framework’s popularity and that a perfect product with intuitive API might have very few questions asked. But I think in reality the amount of questions is a very decent representation of a product’s usage. Assuming that is the case, it’s pretty clear from this data that WPF is the rock star, whereas UWP and Electron are the least popular. The only surprise for me was the relative popularity of Qt.

It makes a lot of sense to choose a popular technology. It will have more experienced developers available for hire, more tools, more documentation, and more 3rd party libraries. In addition to that, there’s a better chance that it got to be popular due to its merits.

I am personally a big fan of WPF. It has a lot of advantages including the best Binding mechanism and the best Templating infrastructure that I ever worked it.

Having said that, there are many points of consideration when choosing a technology:

How do you plan to deliver your software to your customers? This should be a business decision before considering technology options. Consider what are your limitations and what is your optimal customer experience.

For example, the Chrome browser is a Desktop Application with automatic updates that the customer doesn’t even know about. That might be great for a Consumer App, but Enterprise App clients can be very picky about updates. They might want to be explicitly informed about the upcoming update and its release notes.

Some customers, like military device applications, might not have internet access at all and the update will have to be performed with a Flash Drive installation.

My point is that deployment is foremost a business decision and only then technological. Now that that’s clear, let’s see our various options:

An Installer is part of the deployment process, but I set it apart since it’s such a big piece.

Deployment tools like ClickOnce and Squirrel already include an Installer of their own.

There are some great installers at your disposal:

Setting up a CI/CD pipeline is very important to a healthy development process.

The idea behind those concepts is to create an automated workflow for your development. An automated flow is triggered on demand or after a code check-in. It can do the following:

The above bullet points are just an example of course. Each project will have a different automation flow, and possibly several of them.

There are great automation tools on the market like Jenkins and Azure DevOps (previously known as VSTS). I wrote extensively on the CI/CD process in a previous article: Creating an ecosystem with Continuous Integration, Installer, and Deployments for WPF/UWP application.

Logging in a Desktop Application is very different from logging on a server since you don’t have access to your customer’s computer.

There are several standard logging and troubleshooting solutions you can (and should) implement in your Desktop Application:

I suggest reading Debugging a .NET program after crash (Post-morterm) debugging to better understand what pieces you can use after your program crashed and how to use them for debugging.

Having much experience in this matter, I would suggest creating your application with Theming considered in advance.

There are two common scenarios where you would need Theming:

If you do need Theming according to your business needs, you should architect your application accordingly. For WPF, I suggest reading my article WPF complete guide to Themes and Skins.

Note that some Control Suites (see next) include support for popular themes like Material Design.

Depending on your applications, you might want to consider purchasing a Control suite.

Companies like Telerik, DevExpress, Xceed, SyncFusion, and Infragistics offer sets of ready controls with advanced functionality, that you won’t have to develop yourself. These include DataGrids, Charts, Carousels, TreeViews and much more.

It might make sense for you to buy a set of such controls, since developing those yourself can be difficult and time-consuming. Especially if you want some of the more advanced features.

When considering buying 3rd party controls, I take into account these factors:

According to your chosen UI technology, there’s usually a recommended design pattern to use. In WPF it’s MVVM. In WinForms it’s MVP. There are excellent libraries that implement those design pattern and it’s recommended to use one of them.

The most popular frameworks for WPF and UWP are MVVM light, Prism, and Caliburn.Micro. If you’re building a lightweight application, MVVM light provides basic MVVM features. Prism is a monster packed with features, so it’s more suited for large enterprise applications. Caliburn.Micro is convention-based and feels a bit like black voodoo magic, so it’s a matter of personal taste. I didn’t work with it personally but heard good things.

WinForms, on the other hand, is more straightforward, so there aren’t any widely used frameworks.

Electron applications are web technology based and you can use Angular, React or Vue.js like in a regular web application.

Most of those frameworks are great and it’s a matter of personal taste and your team’s experience. For example, if your team is already experienced Caliburn.Micro and loves it, then there’s no reason to change.

If you don’t publish with the Windows Store and your product is paid, then you need some sort of licensing system.

Basically, there are 4 types of licensing, which you can choose from or even combine:

Desktop Application Development for Windows is full of complexity like any software solution. We covered some of the most important decisions in an application’s architecture but there are other considerations like Localization, Testing, User Settings, Database and so on.

I love Desktop Applications because I think the challenges are more interesting than in a typical web development. In a web application, I find myself dealing with Databases, ORM frameworks, Identity, and Authorization. In Desktop Applications there are usually more logical, algorithmic type of problems, multi-threading issues, and a lot of UI work (which I enjoy).

Thank you for reading and subscribe to the blog for more interesting in-depth articles on desktop application development and programming in general.