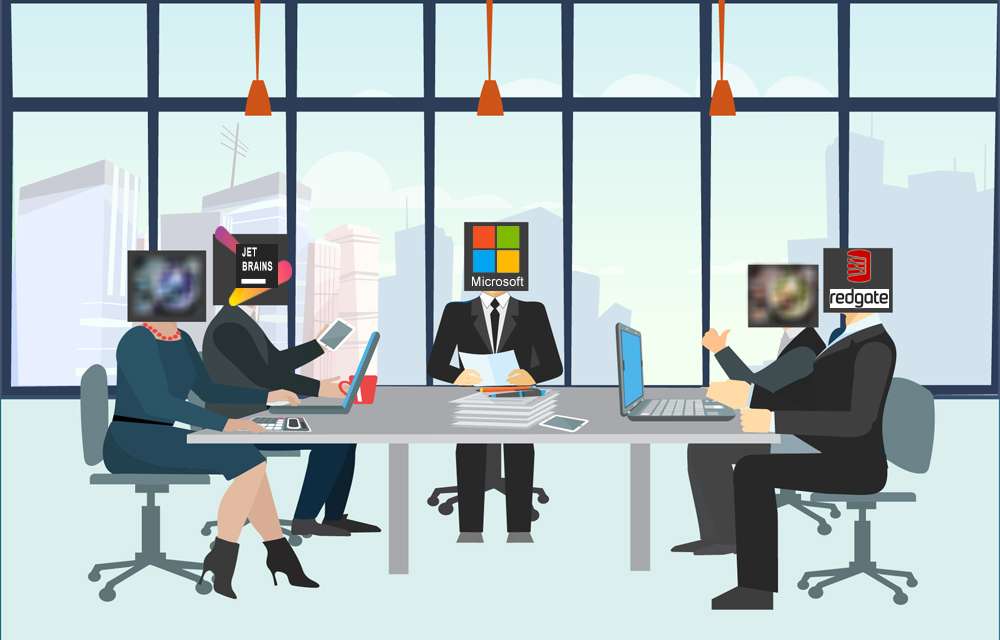 With a rough estimate of over 3 million .NET developers, creating development tools for them is a huge market. There are several big players that are competing for that income. These companies provide productivity tools, profilers, VS extensions, UI Controls and more.

We’ll see which companies are the biggest players, how they fare against each other, how much they earn, and some history on how it came to be.

There are many types of tools and solutions around .NET development. Cloud providers, DevOps solution, Databases and more. In this article, I’d like to focus just on companies that provide solutions for code development. I’m talking about productivity tools, profilers, UI Controls, Visual Studio extensions, test runners, and code analyzers.

It should come as no surprise to no one that Microsoft is by far the biggest earner from .NET development. As the creator and maintainers of the framework, they kind of deserve it.

To continually support .NET development, Microsoft has teams for the .NET Framework and .NET Core, the compiler team(s), the IDE (Visual Studio), teams for the various frameworks (WPF, UWP, WCF, Asp .NET…), and of course the Windows team.

Their main product that competes with the other companies in this list is Visual Studio, and specifically the Enterprise version. This monster includes performance profiling, memory profiling, IntelliTrace, Live Unit Testing and more.

Each .NET developer (until very recently) pretty much had to have VS licenses, and they sure aren’t cheap. VS Professional license starts at 1200$ a year and 800$ renewal. Enterprise on the other hand, which is most of their income, is a staggering 6000$ a year and 1200$ for renewals.

We can’t know for sure, but with millions of .NET developers, Microsoft is probably making a billion dollars each year just from Visual Studio. The real money though comes from cloud services. According to MS quarterly reports [1][2][3][4], it made about 31.2$ billion in 2018 from Intelligent Cloud, which conveniently includes Azure, SQL Server, Visual Studio, Enterprise Services, and Windows Server.

Other than Microsoft, JetBrains is probably the most influential (if not most profitable) company in the industry. They have a myriad of incredible products for .NET including:

JetBrains sets the standard for .NET development tools for everybody, even Microsoft. Since ReSharper was first released in 2004, Visual Studio has been trying to keep up with its feature set. This includes Refactorings, solution navigation, shortcuts, builds – you name it. As time went by, the differences grew even more until ReSharper became an industry standard.

I should note that later VS versions (VS 2012+) did fulfill a lot of the obvious gaps ReSharper filled, and working without ReSharper became a decent experience.

The other JetBrains tools, like the various profilers and unit test became an industry standard on their own. There are major competitors to each (which we’ll talk about) but I’d say they easily beat their counterpart in Visual Studio Enterprise versions.

In 2017, JetBrains released Rider – A full IDE competitor to Visual Studio. Rider is a combination of ReSharper and IntelliJ IDE, with fascinating technology under the hood. The result is all of ReSharper’s amazing features with top-notch performance.

In recent years, we got 2 viable options for .NET development that doesn’t include Visual Studio license. One of them is Rider, and the other is Visual Studio Code with some extensions. Combining that with .NET Core, we can now create an end-to-end .NET project without a single paid Microsoft product.

JetBrains earnings: It’s a private company, so we don’t have access to convenient revenue reports. Owler.com claims their annual revenue is 70.3$ million. JetBrains published a corporate overview report of 2018, which states they have 276000 active paying customers, and that fits well with the 70$ million number reported in Owler. Note that only part of the income is from their .NET products.

One of the biggest competitive markets in .NET development space is UI components. It’s a huge market and has the rare advantage of Microsoft not competing. The main players are Telerik, Xceed, DevExpress, SyncFusion, and Infragistics.

Telerik develops all kind of controls: Data Grids, Charts, Tree Views, Spreadsheets, Carousels, … you name it, they got it. They also support every popular framework in existence, whether it’s Windows Desktop technology like WPF or a JavaScript framework like React.

We can get a rough estimate of their relative popularity by checking the Tags in StackOverflow: 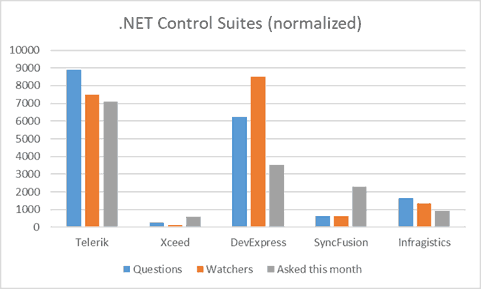 As you can see, Telerik is most popular, with DevExpress a close second and everyone else far behind.

As far as revenue, Telerik reported 60$ million dollars in annual revenue when it was purchased by Progress in 2014. Owler.com sets them at 47.5$ million. Did their income drop? We don’t know, but in any case, the truth should be somewhere around those numbers.

DevExpress is another huge company tapping on the market of UI Controls for .NET. Like Telerik, they develop Controls for everything: WinForms, WPF, UWP, Asp .NET, JavaScript.

They are also the proud owners of CodeRush, a Visual Studio productivity extension that competes with ReSharper. Well, competes doesn’t represent well the situation since ReSharper completely took over that market. We can use Google Trends to get a rough idea of this competition: 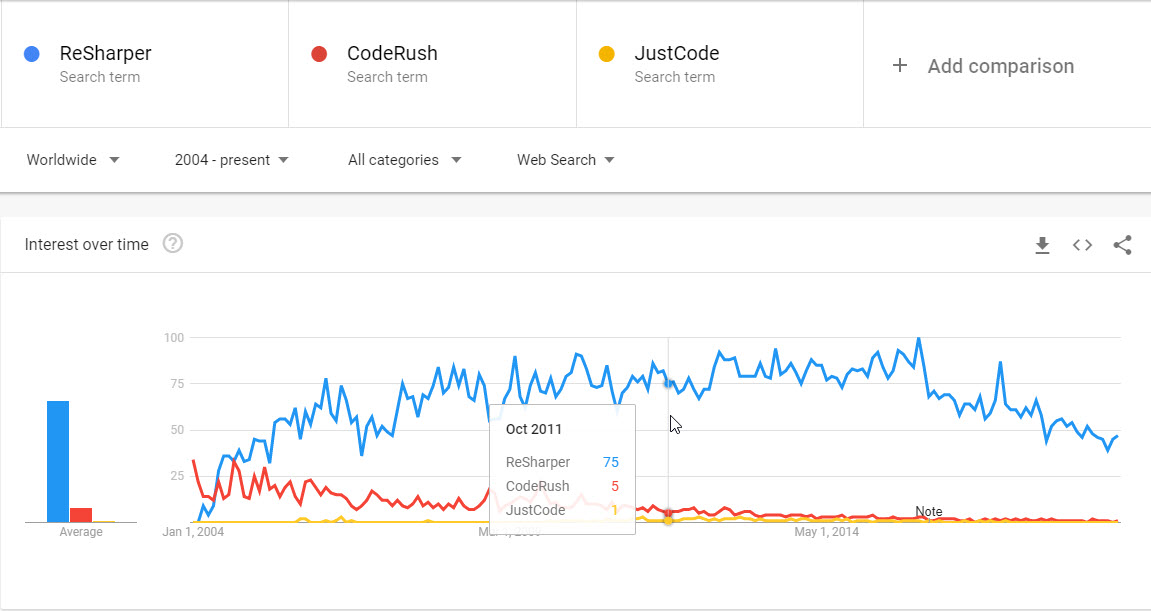 I’m not judging DevExpress though. Telerik suffered a similar fate with JustCode, another attempt to compete with ReSharper. It was eventually discontinued.

DevExpress revenue is 49.8$ million annually according to Owler.com.

The core money comes from the database tools, but they are also behind some of the most popular .NET development tools available. These include ANTS performance profiler, ANTS memory profiler, .NET reflector, and (an obfuscation tool). The most known of which is their memory profiler.

If we compare their tools using our usual StackOverflow tags trick, the result is: 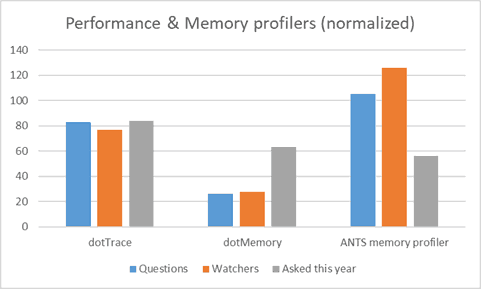 dotTrace has 83 questions, 11 Watchers, and 12 questions asked this year. ANTS memory profiler is still more popular than JetBrain’s dotMemory, though dotMemory is closing the gap (has more questions asked lately). This seems reasonable since Redgate has been around longer and has a really strong presence with enterprises.

Redgate earnings stand at about 60$ million a year [1] [2] [3], which makes them one of the highest earners in .NET development space.

Besides those mentioned, there aren’t many big companies with millions of dollars of revenue. I guess the .NET development tooling space has a pretty uneven distribution. You either earn 50$ million a year, billions of dollars (Microsoft) or much less.

Revenue aside, there are several significant companies that should be mentioned:

Aside from the state of things right now, it’s really interesting to see what’s going to happen in the future. There are a couple of significant potential changes in the .NET development space.

The most interesting thing to see is whether Rider is going to become a major competitor to Visual Studio. It’s been around for a couple of years now and it gained some traction (mostly with Unity 3D developers) but not a real threat to Visual Studio yet. However, with better pricing, amazing performance, and ReSharper capabilities, Rider can definitely turn the tide.

Another development is whether one of the smaller companies is going to become ReSharper-level popular. Some of them have a lot of potential and software development has been known to embrace the next hot thing once in a while.

Thanks for reading, I’d love it if you subscribed to my blog, and have a great day.