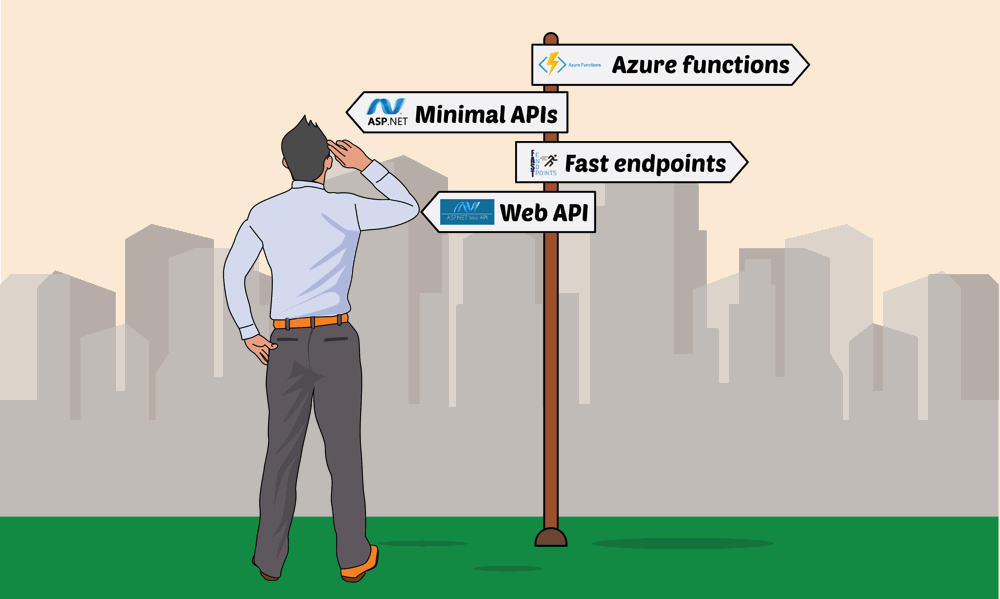 Did you notice that Microsoft announces a new and amazing web development framework each year? This year we had Minimal API hosting, before that we had Blazor, and before that we had ASP.NET Core. My point is that as the years go by, we get more and more technologies, and it’s getting hard to keep track of them all. In this article series, we’ll go over all the ways to build a web application using Microsoft technologies and try to make some order in the mess. Our constraint is to use .NET and Azure.

In the previous article, we covered options for the client-side, including SPA frameworks, Web Assembly, and ASP.NET MVC. Some of those choices, like Blazor Server, Razor Pages, and ASP.NET MVC, were server-rendered pages. But in the case of single-page applications, which is sort of the industry default in recent years, the client needs a REST API server that will return the actual data. In this post, we’ll see how to create such an API server in .NET.

Microsoft created a lot of web development frameworks over the years. To make things clearer, here’s a brief historical recap:

Our journey begins in 1998 when Microsoft released Classic ASP pages. They were replaced by ASP.NET pages and ASP.NET Web Forms in 2002 which were a success at the time. Moving forward to around 2005, new frameworks like Ruby on Rails gained popularity with the MVC pattern, to which Microsoft responded in 2007 with their own MVC framework called ASP.NET MVC. This is around the time that Silverlight was released, which was plugin-based and not a server rendering HTML/CSS. Even though many .NET developers loved Silverlight, fate had something else in mind when Apple announced iPhone wouldn’t be supporting plugins. The technology died out around 2011. In 2012, following the success of SPA frameworks like AngularJs, ASP.NET Web API was released, which was using a similar MVC model but providing only a server-side REST API. In 2016, another server-side option was added to this stack, whose name strangely didn’t include ASP.NET. This was Azure Functions, which offered a serverless model. In the same year 2016, .NET Core was released, bringing with it ASP.NET Core MVC and ASP.NET Core Web API, the successors to their respective previous versions. Blazor Server and Blazor WebAssembly, the last two major frameworks added to our story, were first released at 2018 and became GA in 2019 and 2020 respectively. Finally, .NET 6 was released in late 2021 along with ASP.NET Minimal APIs.

I hope this history lesson didn’t confuse you even further. To simplify, this whole journey leaves us with just a few realistic modern options for a server-side API:

There are other options if you want your ASP.NET server to render pages, in which case, you can choose between ASP.NET Core MVC, Razor pages, and Blazor Server. We covered those in the previous article. But if you chose a client-side option like a single-page-application (SPA), then you’ll need a back-end server which will be one of the above. Let’s see how those fare against each other.

Web API is the canonic choice to create an API in .NET. It had a lot of versions and iterations since 2012 and grew into a mature and productive framework which also happens to be very performant. It follows an MVC pattern where you map URL routes to Controller classes and specific endpoints to methods (known as Actions). There are a myriad of features and support libraries. There’s good inherent support for dependency injection. Things like authorization and serialization are easy to implement and customize thanks to a middleware model support where you can add behavior before or after specific stages in a request.

You have everything you could hope and dream for in terms of features and customization for your REST API server.

There are some downsides to this framework, at least in my personal opinion.

Here’s an example from AspNetCore.Docs. Startup.cs:

And here’s the controller that represents the endpoint GET /WeatherForecast:

Note that the example above is the classic way to write ASP.NET Core Web API. .NET 6 reduced the ceremony a bit and now the code from Startup.cs moved to Program.cs and became somewhat nicer.

By the way, to see how ASP.NET Core is doing in terms of performance, check out TechEmpower benchmarks and look for “aspcore”. ASP.NET Core is usually one of the top performers.

If you ever worked with Node.js, you know that it takes about 5 lines of code to create an app with an HTTP endpoint. So why does a simple ASP.NET Web API requires 5 files and dozens of lines of code? The answer is it doesn’t. It’s just the way this technology evolved, the C# language, and an opinionated view by the ASP.NET team. So with that in mind, the new Minimal APIs template allows you to do the same thing Node.js does in 5 lines of code, in 4 lines of code.

You can observe that there aren’t any using statements, no namespaces, and no classes. This is all part of the C# 10 magic that includes Global using directives, File-scoped namespace declaration, and top-level statements.

In addition, there are no special methods that you need to override like Configure and ConfigureServices. Instead, you do everything in simple functional code, like this:

You can even omit the [FromServices] attribute.

What about authorization, middleware, Swagger, and all the other million features we have in ASP.NET Web API you might ask? Everything you know and love is still there. Just simpler.

Another advantage is a slight performance improvement due to removing some overhead.

There’s an interesting open-source alternative to Minimal APIs called Fast Endpoints, which also allows writing an HTTP server in .NET without the ceremony and overhead of ASP.NET Web API. Here’s a snippet:

Azure Functions is quite different from the ASP.NET offerings. It offers a serverless architecture model, in which a server does exist but you sort of don’t have to think about it or manage it. You write the code and a server will magically appear and run that code when needed. Azure will scale automatically according to the request load, allowing many server instances (up to 200) to run in parallel, handling your requests.

This is marketed as a programming model where you think only about solving problems and not about managing your server. I don’t entirely buy this because an Azure App Service also offers managed hosting, in which you don’t have to worry too much about managing your VM and you can scale automatically just as well. However, there is something to be said about some Azure Function features that an App Service just doesn’t provide like:

You might be familiar with a feature of an Azure App Service called WebJobs that allows running scheduled background tasks. You can think of Azure Functions as WebJobs as a service, except it’s richer in features.

By the way, the consumption plan includes a very tempting free grant of 1 million requests and 400,000 GBs of resources. We’ll talk about it a bit when trying to choose between the options.

What about Azure Kubernetes Service (AKS) and microservices?

We talked in this post about all the server-side options for your applications with .NET. This might be an ASP.NET Web API or an Azure Function. But Kubernetes is an orchestrator for multiple services, not an API server. Choosing between a Kubernetes cluster or a VM is a deployment choice. You might choose to do microservice architecture with AKS where each service is an ASP.NET Web API project. Or you can deploy those same ASP.NET Web API projects to Azure App Service instances. There are pros and cons to each approach, considerations like latency and isolation, and more interesting stuff when choosing a deployment method, but we’ll talk about that in the next post.

By the way, Kubernetes isn’t the only option for microservices in Azure, there are some very compelling reasons to use the lesser-known Azure Service Fabric. But more on that in the next post as well.

I think we covered all the popular modern technologies for an API server in .NET. Let’s go over them and try to figure out the pros and cons of each.

Now that you chose client and server technology, it’s time to deploy them to Azure. In the next blog post, we’ll explore all the options to deploy and host in Azure, including App Services, Static Web Apps, Kubernetes, and others.

Hope this was useful to you, stay tuned to the next one. Cheers.