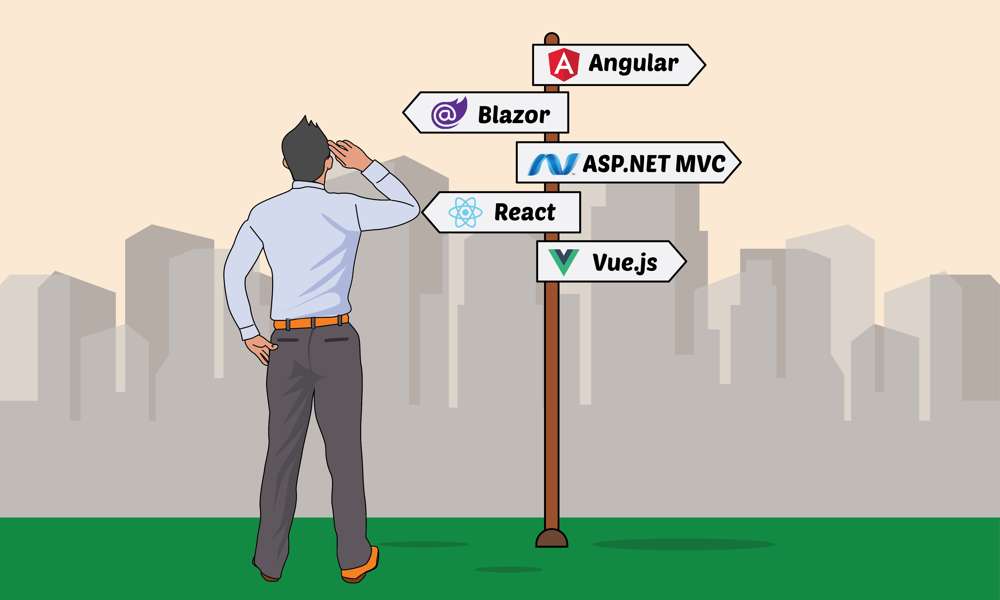 There are so many different ways to create a web application today, it’s staggering. We have lots of different languages, different clouds, different server-side runtimes, and different deployment tools. Web assembly complicates things even more now that we can create our front-end in practically any language we want. In this post, we’ll try to make some semblance of order. We’ll go over the most popular technology choices in each layer of web application development, and see their pros and cons. That includes the client-side tech, the backend server, the ways to deploy to Azure, the CI/CD pipeline, the database, and the login mechanism.

The only constraint we’ll have is that we have to deploy to Azure and we have to use .NET. Why? First of all, without some constraints, I would have to write several books to cover every type of web technology. But other than that, I love C# and Azure and I have experience with them, so working with a different cloud or a different language doesn’t make sense for me, and if you’re reading this blog, then you’re probably the same.

There was a time that a new JavaScript framework sprang to life every other day. I’d love to say that that period is over, but it’s not entirely true. The appearance of Web Assembly caused a new gold rush and now it seems everyone is writing a runtime for their favorite language. But at least we are somewhat agreed on SPAs and MVC frameworks. But I’m getting a bit ahead of myself, so let’s break things down. There are three types of directions you can take when choosing a front-end framework.

There are other options, but we’ll talk only about these because they are the ones the community and Microsoft seem focused on.

A SPA means the entire front-end side is a single static bundle of HTML, CSS, and JavaScript. The interaction with the server is to fetch data via REST calls. The user will download the bundle once and then navigating from one page to another won’t require additional roundtrips to the server.

There are lots of advantages to this approach. Once you’ve downloaded the bundle, the app can be very responsive because its only constraint is the client resources and not the network (other than fetching data). Since the bundle is static, you can push it to a CDN and get fantastic download speeds. The bundle is cached by the browser, so the user will have to download it just once, at least until your next deployment. Another advantage of a SPA is that the JS frameworks and ecosystems are extremely mature. The popular frameworks like React.js, Vue.js, and Angular are very well supported and documented with a huge community to each. You have an ecosystem of bundlers (like Webpack), linters (like ESLint), test runners (like Jest), and transpilers (like Babel) that make all aspects of developing effective and enjoyable.

Here’s an example of React components:

Choosing between React, Angular, and Vue.js is a whole other discussion, but they are all good choices with a lot of successful projects for each. Having said that, it seems that React has won the public opinion as to the most loved web framework.

A server rendering concept means that the server generates the HTML, CSS, and JavaScript for each page. So while in a SPA, your JavaScript issues an AJAX call to fetch data from a server, in an ASP.NET Core application, the server will respond with an HTML that already includes the needed data. This can be good for performance in certain scenarios because the server generates the HTML code instead of JavaScript running on the client. A user with a slow device can have a bad experience with a SPA that takes a long time to run JavaScript and render HTML tags, whereas during server rendering that part is done by your fast server computer.

Tip: There are ways to server-side-render SPAs as well.

We have several options in this category, even if we narrow it only to .NET:

Index.Razor is the parent that contains the component:

Don’t know about you, but this seems much nicer to me than ASP.NET MVC’s views, controllers, and models combo. Kind of reminds Vue.js single file components, doesn’t it?

The last option, Blazor Client, uses Web Assembly technology, which allows writing code in any language in the browser. Well, it’s a bit more complicated than that, and involves having to download and run a C# runtime. But the result is being able to run C# code on the client-side. The disadvantage is that the user will have to download this runtime and even the smallest app will be pretty sizeable (over 2MB for a ‘hello world’ app).

The pro is a fast and responsive client application that’s written entirely in C#.

One cool detail is that the code for Blazor Client and Blazor Server are pretty similar. Up to a certain point, after all, Blazor Server runs on the full .NET runtime, whereas Blazor WebAssembly runs in a minimized WASM Mono runtime.

What about ASP.NET Web API?

In this post, we’re choosing only the front-end technology of our application. Granted, the server rendering technologies are both client and server side. But the other choices (SPA and Blazor Client) need a server side, and that’s exactly where ASP.NET Web API comes in. We also have other options like ASP.NET Core Minimal APIs and Azure Functions, but we’ll talk about all that in the next part of this series.

Now that we covered all the popular options, it’s time to choose. Like everything in software development, the correct choice is always “It depends”. But I’ll try to give you a quick (opinionated) overview of each choice and what might fit better in different cases. Here are our candidates again:

For some reference on the community’s direction, here’s Google Trends for the past 24 months when comparing Razor pages, Blazor, and ASP.NET MVC:

ASP.NET, in all its configurations, is in the lead, followed by Blazor. This is somewhat of a moot point since Blazor is also part of ASP.NET, but I think most people don’t search for “Blazor ASP.NET”. Razor pages is way behind.

By the way, here’s what happens if I add React:

I admit it’s a bit unfair because React isn’t limited to just .NET. But man, what a difference…

After choosing your front-end tech stack, the next choice is your server-side technology, where there are a bunch of options as well. We mentioned ASP.NET Web API, Azure Functions, and the newer Minimal API model, but all that in the next blog post.

I hope this post helped in some way, possibly making sense of all the different pathways you can take when building a web app. Check out the next part where we’ll see all the great server-side options .NET has to offer.