Did you hear about stackshare? It’s a pretty neat website that I recently discovered. The idea is that you can search for any tech company, and see their technology stack. For example, here is Airbnb’s: 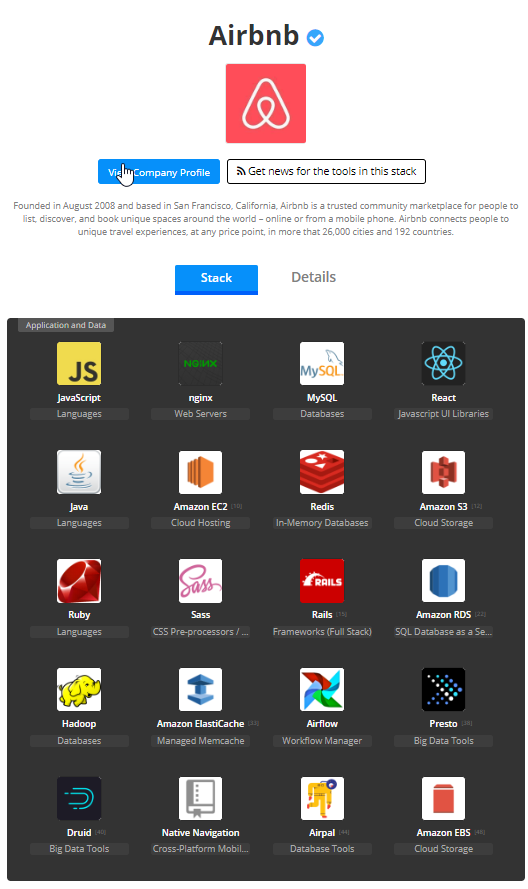 So the first interesting thing that came to mind was checking out what the most successful startups are using. I used this list of “successful startups”, in addition to angel.co startup database. After looking at about 100 startups, I ended up with data from 23.

Focusing on back-end technology, this is the result: 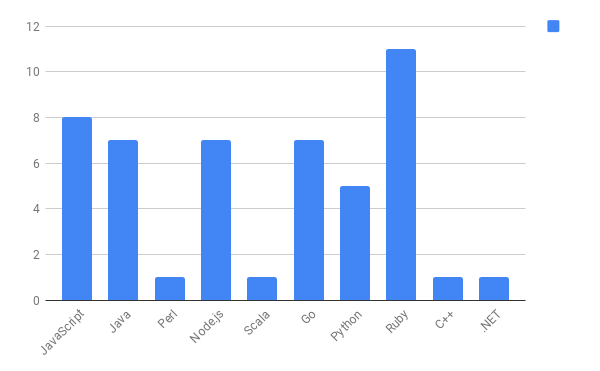 I didn’t include PHP because there were a lot of startups that had nothing but PHP and Apache Server. That’s partly why I looked at 100 startups and ended up with 23. Startups with just PHP are probably e-commerce websites or non-software at all. You can see the raw data spreadsheet here.

That chart surprised me in a few ways. For example, I didn’t expect the great popularity of Ruby. But mostly, being a .NET developer, it was discouraging browsing through those endless startup companies and never seeing C#, .NET, Asp.NET, Xamarin or SqlServer. Eventually, I was able to find a company (Vungle) with a .NET element, but their stack was so crowded that it might have been used for some minor part for all I know.

There were other interesting things in the data. For example, nginx, React, PostgreSQL, Backbone.js, Kafka, and Redis turned out to be very popular.

As for the lack of Microsoft technologies, I heard that .NET weren’t too popular with startups but never thought things were that bad.

Maybe it would be more popular with software giants like Uber, Dropbox, and Shopify? That’s pretty easy to check with stackshare.

I looked at all the big tech companies I know, that aren’t creating their own dev tools. The final list had 22 companies. including Dropbox, Uber, Stack Overflow, eBay, Shopify, Stripe, PayPal, and Netflix. Here is the result: 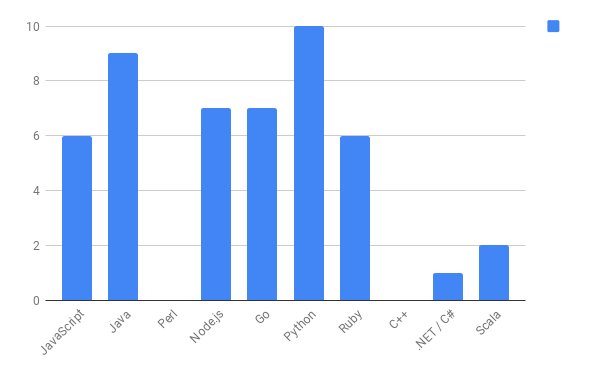 The raw data spreadsheet is here.

This paints a pretty similar picture to the startup chart. Java, Go and Python are a bit more popular and Ruby is a bit less popular in comparison. A single company used Microsoft tech: The ever-helpful Stack Overflow.

Figuring out the mystery of the missing tech stack

JetBrains survey of 2018 and StackOverflow developer survey of 2018 show that C# is the 4th most popular language after JavaScript, Java, Python and possibly PHP. So C# is definitely widely used, but where?

Looking at the Software Giants list again, I realized all these companies were initially software startups. And as already established, startups don’t much use .NET.

So if startups and software giants don’t use .NET, who does? The answer that comes to mind is Enterprises that aren’t software companies.

That means companies whose primary product is not software. Or wasn’t initially. These can be Banks that need websites and trading platforms. These can be hardware companies that require Command-and-Control applications. Various government and military branches that need all kinds of software solutions.

Any corporation nowadays needs a software solution. These corporations are willing to spend money on more expensive technology and feel more “at ease” with a big company like Microsoft backing it. This is very much In contrast to open source technology that won’t give support to the big clients in the way they would want.

Will .NET ever become popular with startups?

I think Microsoft realized the future lies in the cloud. The money will not come from selling Visual Studio licenses or SqlServer. The big money is in the compute time sold on Azure. This means it’s in Microsoft’s interest to make tools cheaper. Cheap tools will attract more customers which will end up spending even more money on Azure.

I don’t know how much any of that will help. There’s a great deal of existing startup culture, which needs a good enough reason to change.

This brings up the question if .NET brings any advantages to startups, say over Ruby or Node.js. My personal point of view is definitely. But that’s an issue for another blog post.