5 Techniques to avoid Memory Leaks by Events in C# .NET you should know 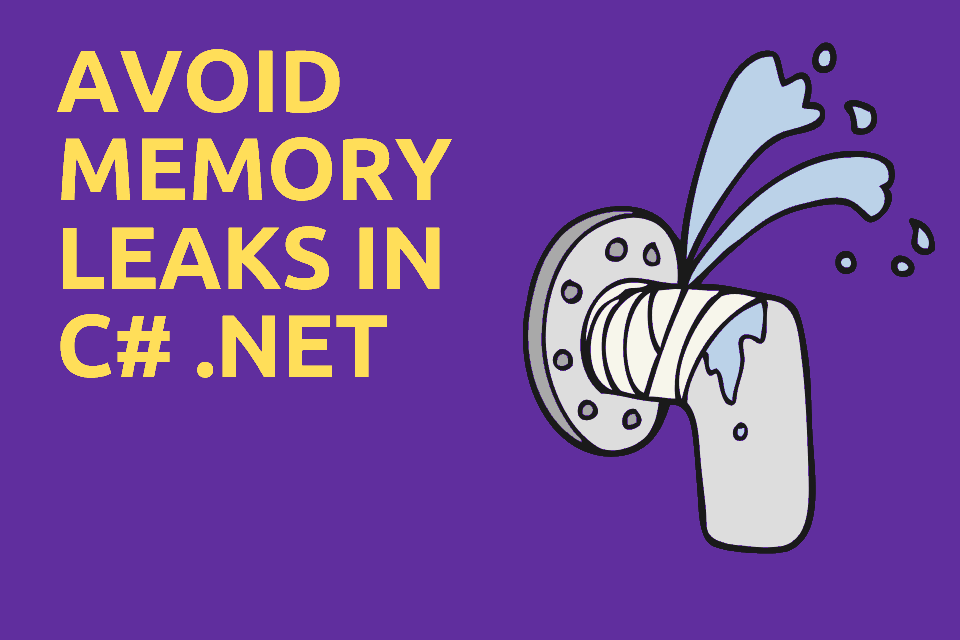 Event registrations in C# (and .NET in general) are the most common cause of memory leaks. At least from my experience. In fact, I saw so much memory leaks from events that seeing += in code immediately makes me suspicious.

While events are great, they are also dangerous. Causing a memory leak is very easy with events if you don’t know what to look for. In this post, I’ll explain the root cause of this problem and give several best practice techniques to deal with it. In the end, I’ll show you an easy trick to find out if you indeed have a memory leak.

The answer is that with a garbage collector(GC) present, a memory means there are objects that are still referenced but are effectually unused. Since they are referenced, the GC won’t collect them and they will remain forever, taking up memory.

In this example, let’s assume WiFiManager is alive throughout the lifetime of the program. After executing SomeOperation, an instance of MyClass is created and never used again. The programmer might think the GC will collect it, but not so. The WiFiManager holds a reference to MyClass in its event WiFiSignalChanged and it causes a memory leak. The GC will never collect MyClass.

1. Make sure to Unsubscribe

The obvious solution (although not always the easiest) is to remember to unregister your event handler from the event. One way to do it is to implement IDisposable:

Of course, you’d have to make sure to call Dispose. If you have a WPF Control, an easy solution is to unsubscribe in the Unloaded event.

Cons: You can easily forget to unsubscribe, or won’t unsubscribe in all cases which will lead to memory leaks.

2. Have handlers that unsubscribe themselves

However, sometimes you’d want your event handler to be a lambda expression. In that case, here’s a useful technique to have it unsubscribe itself:

In the above example, the lambda expression is useful because you can capture the local variable someObject, which you wouldn’t be able to do with a handler method.

Pros: Simple, readable, no chance for memory leaks as long as you’re sure the event will fire at least once.

Cons: Usable only in special cases where you need to handle the event once.

3. Use Weak Events with Event Aggregator

When you reference an object in .NET, you basically tell the GC that object is in use, so don’t collect it. There’s a way to reference an object without actually saying “I’m using it”. This kind of reference is called a Weak Reference. You’re saying instead “I don’t need it, but if it’s still there then I’ll use it”. In words, if an object is referenced by nothing but weak-references, the GC will collect it and free that memory. This is implemented using .NET’s WeakReference class.

We can use that in several ways to prevent memory leaks. One popular design pattern is to use an Event Aggregator. The concept is that anyone can subscribe to events of type T, and anyone can also publish events of type T. So when a class publishes the event, all subscribed event handlers will be invoked. The event aggregator references everything using WeakReference. So even if an object subscribed to an event, it can still be garbage collected.

Cons: Acts as a global container for all events. Anyone can subscribe to anyone else. This makes the system hard to understand when overused. No separation of concerns.

With some code acrobatics, it’s possible to utilize Weak Reference with regular events. This can be achieved in several different ways. Here’s an example using Paul Stovell’s WeakEventHandler:

I really like this approach because the publisher, WiFiManager in our case, is kept with standard C# events. This is just one implementation of this pattern, but there are actually many ways you can go about it. Daniel Grunwald wrote an extensive article about the different implementations and their differences.

Cons: The different implementations of this pattern have subtleties and different problems. The implementation in the example actually creates a wrapper object registered that is never collected by the GC. Other implmentations can solve this, but have other issues like additional boilerplate code. See more information on this in Daniel’s article.

Problems with the WeakReference solutions

Using WeakReference means the GC will be able to collect the subscribing class when possible. However, the GC doesn’t collect unreferenced objects immediately. It does randomly as far as the developer is concerned. So with weak events, you might have event handlers invoked in objects that shouldn’t exist at that point.

The event handler might do something harmless like update inner state. Or it might change the program state until some random time the GC decides to collect it. This type of behavior is indeed dangerous. Additional reading on this in The Weak Event Pattern is Dangerous.

This technique is to test for existing memory leaks, rather than coding patterns to avoid them in the first place.

Suppose you suspect a certain class has a memory leak. If you have a scenario where you create one instance and then expect the GC to collect it, you can easily find out if your instances will be collected or if you have a memory leak. Follow these steps:

1.Add a Finalizer to your suspect class and place a breakpoint inside:

This will force the GC to collect all unreferenced instances (don’t use in production) up to now, so they won’t interfere with our debugging.

In step 1, I told you to place a breakpoint in the class’s Finalizer. You should actually pay attention to that breakpoint after the first garbage collection’s finished. Otherwise you might be confused with older instances being disposed. The important moment to notice is whether the debugger stopped in the Finalizer after your scenario.

Here’s me debugging a scenario that uses WeakEventHandler from the last technique and doesn’t have a memory leak:

Here’s another scenario where I use regular event registration and it does have a memory leak:

It always amazes me how C# might seem like an easy language to learn, with an environment that provides training wheels. but in reality, it’s far from it. A simple thing like using events can easily turn your application to a bundle of memory leaks by an untrained hand.

As far as the correct pattern to use in code, I think the conclusion from this article should be that there is no right and wrong answer for all scenarios. All provided techniques, and the variations of are viable solutions depending on the case.

This turned out to be a relatively big post, and yet I stayed at a relatively high level with this issue. This just proves how much depth exists in these matters and how software development never ceases to be interesting.

For more information on memory leaks, check out my article Find, Fix, and Avoid Memory Leaks in C# .NET: 8 Best Practices. It’s got tons of information from my own experience and other senior .NET developers that advised me for it. It includes info on Memory Profilers, Memory leaks from unmanaged code, monitoring memory and more.

I’d love you to leave some feedback in the comments section. And be sure to subscribe to the blog and be notified of new posts.