This tutorial is part of a series:

In the previous tutorial, we saw some of the basics of debugging in Visual Studio. This included Breakpoints, Navigation through code, and Investigating variables with the DataTip and QuickWatch.

In this tutorial we will go over all the windows Visual Studio has for debugging.

The Watch Window allows you to see value of variables and expressions while debugging. It’s kind of like the DataTip you get when hovering over a variable, except that you can write any expression you want. It’s available from Debug | Windows | Watch | Watch 1 or Ctrl + Alt + W + 1.

There are 4 watch windows in Visual Studio, which you can use in different contexts (Watch 1, Watch 2, etc.).

Any expression can be entered into the watch window. The same rules apply to expressions as to code. So if you write an illegal expression, you’ll see the same compiler error.

To add items to watch do any of the following:

When to Use the Watch Window:

While the DataTip and QuickWatch are more popular, the watch window is very useful when you need to re-evaluate the same variables and expressions multiple times. This happens if you hit the same breakpoint over and over again, or different breakpoints in the same class. The most common scenario is with a breakpoint inside a loop.

You can use watch window evaluate the Object Id instance we talked about in Part 1. That’s where you create a weak reference to any object, which can be evaluated from anywhere with $1, $2, and so on.

There are some behaviors, rules and features to the watch window. 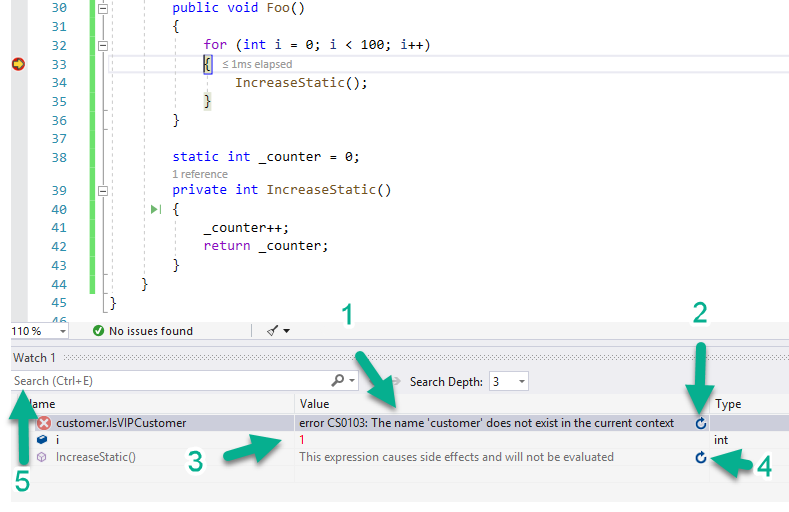 The immediate window is available in the menu from Debug | Windows | Immediate or Ctrl + Alt + i. You can type in any expression and the immediate window will evaluate. It’s kind of like the Watch window, but it acts more like a command line window in Windows or Linux. 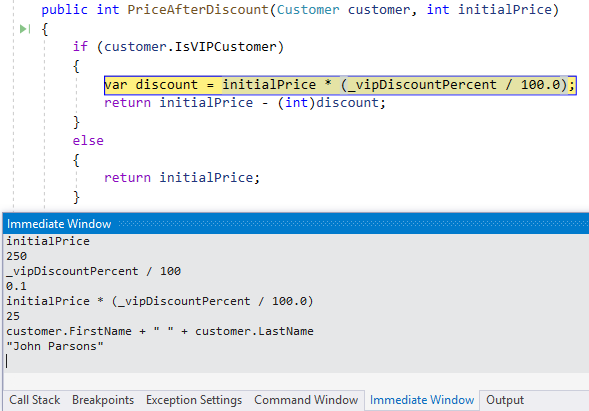 For me, the immediate window was always more convenient than the Watch or QuickWatch windows.

Side Effects in Watch Window, QuickWatch, and Immediate Window

We saw before that evaluating the expression can cause side effects. For example, consider this class:

If I evaluate Foo() in the Immediate Window, number will increase and my application state will be changed: 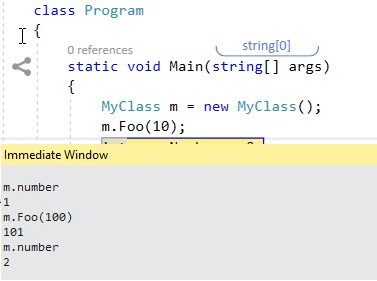 You can add the , nse (No Side Effects) postfix to an expression, and it will evaluate without changing the application state. 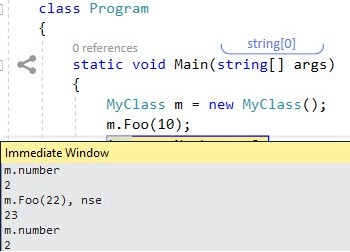 This works both in the Immediate Window and in the Watch Windows.

As you might find out, not all expressions are supported in no-side-effects mode. For example, you can’t do a network request in this mode because there’s no way to guarantee it will have no side-effects.

VS offers 2 automatic-watch tool windows: The Locals and Autos windows.

The Locals will show local variables of the current scope. It usually starts with this, which represents the current class.

The Autos window will show all variables used in the current line and in the previous line. These could be local variables, class members or static variables. The Autos also shows values returned from methods, which is useful at times.

One of the most useful tool windows is the Call Stack Window. It shows the chain of methods that called one another, up to the the currently debugged method. For example, suppose you have the following Console Application:

When you place a breakpoint int GetDiscountForVip() the call stack will be:

You can double-click any method (aka Frame), and you will be navigated to that part in the method:

Note that there’s a greenish arrow on the left. This shows that this is the currently debugged method, but also that it’s not the topmost Frame. While in this mode, you can hover over variables in the current Frame (method) and see their values.

Besides the ability to switch frames by double-clicking, you can open the Call Stack’s context menu by mouse right-clicking on any frame. 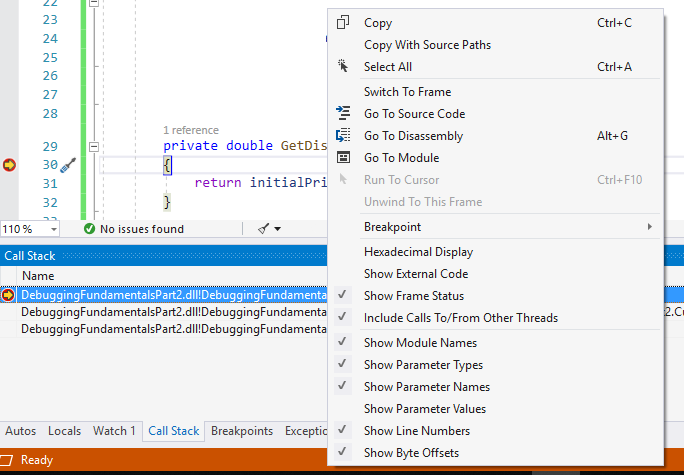 The Threads Window is the final tool window in what I call the Truly Vital Debugging Windows group. This window shows all the currently active threads, and allow to switch between them.

When stopped on a breakpoint in LogCounter, you will be able to see all 3 running thread.

There are also other visualization and minor capabilities which are less important.

Finishing up and Coming soon

This is it for this tutorial. We saw the fundamental must-know debugging tool windows that Visual Studio has to offer. There’s another tool window which I consider a fundamental one, and that is the Exceptions window. This is a rather big subject, which is covered in the next part of the tutorial.