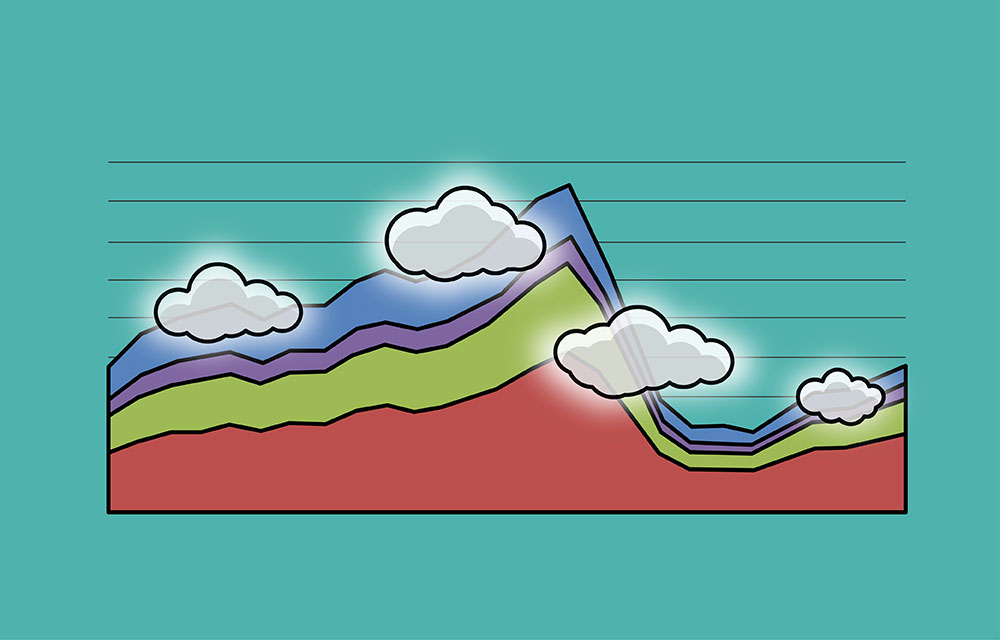 Memory problems are some of the most important and potentially devastating things in .NET. Even though the applications works on top of a managed environment (the CLR) that includes automatic garbage collection, memory issues didn’t disappear. Far from it. It’s still as important as ever to understand how memory works and how to deal with problems.

The two biggest memory-related issues in .NET are memory leaks and memory pressure (aka GC Pressure). They cause pretty inconvenient effects like out-of-memory crashes, performance problems, high memory consumption, and “live” objects that should have been collected but remain alive and still execute code. Our primary tools when dealing with those issues are memory profilers. They are one of the most important category of tools in .NET troubleshooting, and in this article, you’ll see how to use them and extract the most information from them.

This article assumes you have basic to intermediate knowledge of garbage collection in .NET. If you start reading and feel the need to catch up, here’s a good article on the basics of GC: Understanding Garbage Collection in .NET.

There are several excellent profilers in the .NET ecosystem. Here are the most widely used:

In this article, we’ll be using screenshots and terms from dotMemory and SciTech’s profiler. But these terms are pretty similar to all of these tools.

There are several ways to work with memory profilers (not all profilers support all the ways): 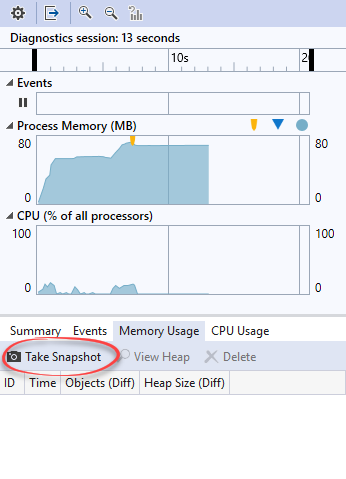 NOTE: As far as I know, none of the profilers currently support ASP.NET Core on Linux at the time of writing this. But all of them support .NET Core on Windows.

How Memory Profilers Work Under The Hood

Memory profilers use a technology called the Profiling API. The CLR allows an agent process (the Profiler) to profile (attach) to a running process. Once profiling, the profiler can get information on stuff happening in the analyzed process. This includes:

The profiler agent lives inside the same process as the profiled program, and it can access the same memory.

In addition to the received information, the profiler can manipulate the main process’s code. For example, the profiler might add a piece of code that executes whenever a certain function begins.

The profiling API provides all the information about the process’s memory. The cost is a significant performance overhead. You probably don’t want to have a profiler attached in production.

The exception to this rule is PerfView, which doesn’t use Profiling API. Instead, PerfView uses ETW events to get information on everything that happens with the garbage collector. This includes events on each allocation, each garbage collection, each generation promotion, etc. The upside of using PerfView is that it has less of a performance overhead. You can run PerfView in production and set it to create a snapshot automatically on some trigger— for example when memory reaches a certain threshold.

What Memory Profilers Let You Find Out

While attached to the process, a memory profiler will show overall memory usage in your process. Memory size in each generation of the GC heap, unmanaged memory size, collection times, etc. This is the same data you can get from performance counters, but the profilers visualize it much better. 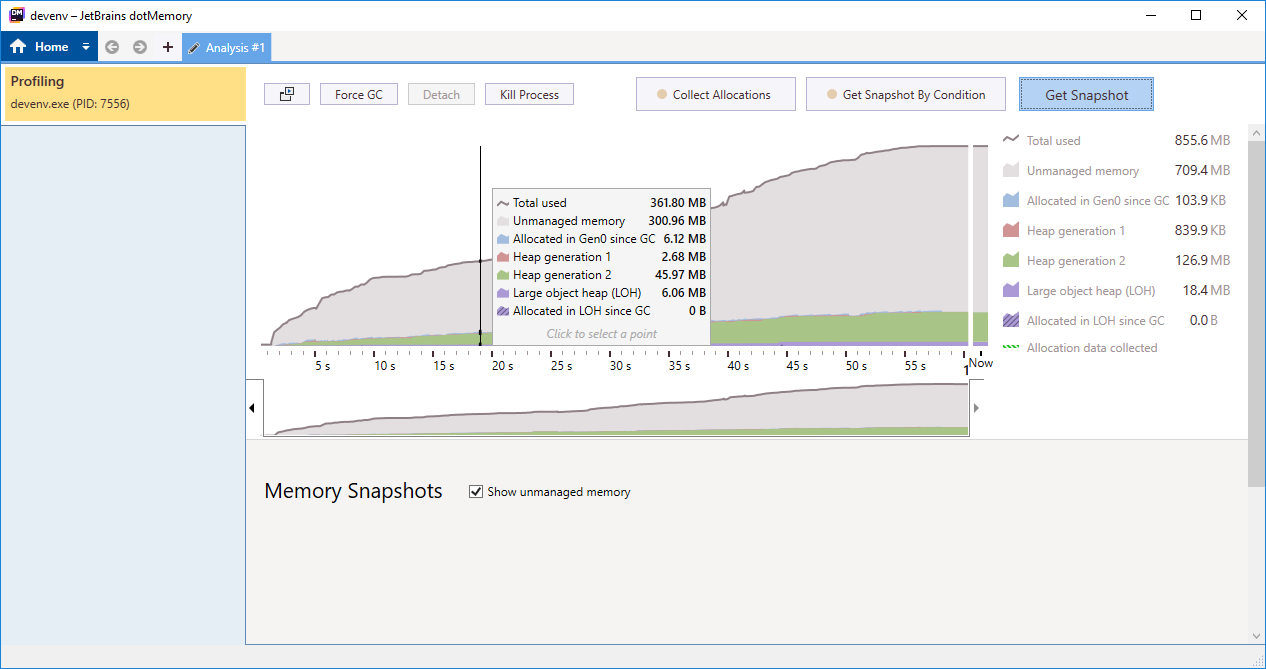 At any time, you can Take a Snapshot. A snapshot is a representation of the entire application memory at the moment it was captured. The real value of memory profilers is investigating these snapshots. When investigating a snapshot, you’ll be able to:

Besides investigating a single snapshot, performance profilers allow to compare several snapshots. When comparing two snapshots in the same profiling session (taken in the same process), you’ll be able to see objects that were alive in both snapshots, objects that are already dead because they were collected, and new objects that were allocated in between snapshots. This is especially useful to find memory leaks, which we’ll discuss later in detail. You can also compare snapshots from different profiling sessions, which shows differences in object size and count.

To successfully profile an application, we need to understand certain terms. Learning them will also help to better understand how memory works in .NET.

Let’s consider the screenshot above, captured from dotMemory. That’s a real-time view of an application’s memory during runtime. It shows what the current memory consists of, and how the garbage collector behaves. Let’s go over the terms: 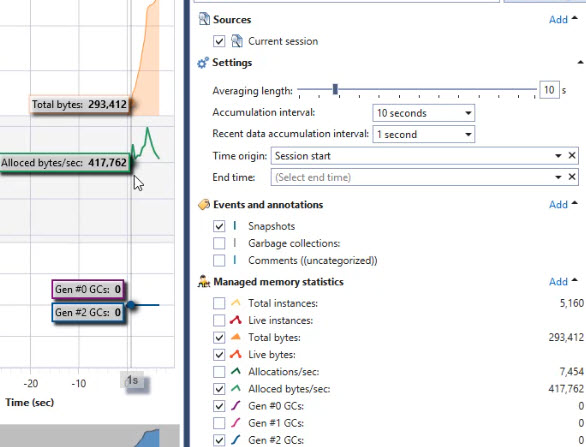 This information provides a bird’s eye view of your application’s memory health. These stats can indicate memory leaks or memory pressure, but more on that later. Note that all this data can be consumed with performance counters, but memory profilers visualize this much better.

NOTE: A very important statistic is not included here, and that is the performance counter .NET CLR Memory | % Time in GC. This counter shows how much time your process spends in garbage collection, which directly indicates GC pressure.

The real power of memory profilers is analyzing memory snapshots. The most important screen to understand is the one in the Overview or Types screen, which shows all the objects in memory, grouped by Type. 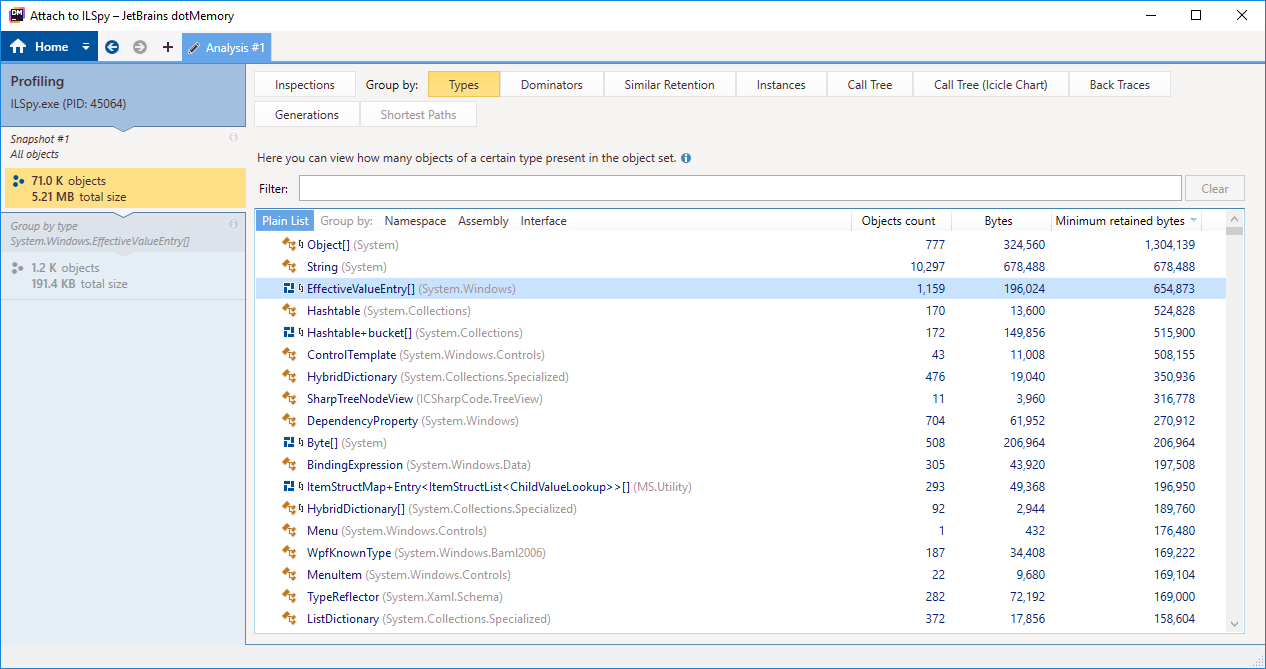 Let’s go over the columns:

An instance of type Person is going to be 20 bytes in a 32-bit process. This includes an Object Header1 (4 bytes), Method table pointer2 (4 bytes), an int field (4 bytes) and two references (4 bytes each). So the Bytes indicator for each object is 20 bytes. However, the Retained bytes (aka Reachable instances) also includes the number of bytes in string FullName and the number of bytes in Address LastAddress. Minimum retained bytes (aka Held bytes) depends on whether string FullName and Address LastAddress are referenced by other objects. If, for example, all addresses are also stored in another data structure, then they will not be included in minimum retained bytes. 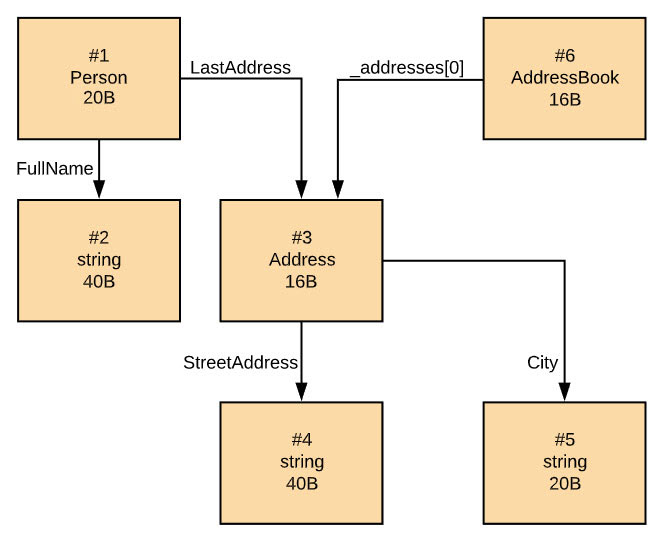 Tip: In most cases, we’ll want to view objects sorted by Minimum retained bytes. This will give the best overall picture of which objects types are causing the most memory consumption.

Memory profilers allow us to compare several snapshots to each other, this is extremely useful for finding memory leaks. When this happens, the most important view is the object type table.

When analyzing a snapshot, you can investigate specific instances or all instances of a specific type. There are several things you can find out:

Summary & Coming Up Next

In this article, we saw what are memory profilers, which profilers are available for .NET, and how these tools work. We covered the basic principles of these profilers, and what kind of information you can extract with them.

In Part 2, we’ll see how to conduct an investigation with memory profilers, and specifically how to find memory leaks. We’ll see several ways to identify memory leaks, what kind of issues they can cause, how to find the leaky objects, and how to fix the leak.

In Part 3, we’ll see how to conduct an investigation with memory profilers to find and solve memory pressure (aka GC Pressure). We’ll see how correct memory management is crucial to the performance of a .NET process. And we’ll see that we need to design our application in a “garbage collector friendly” way to get the best performance.