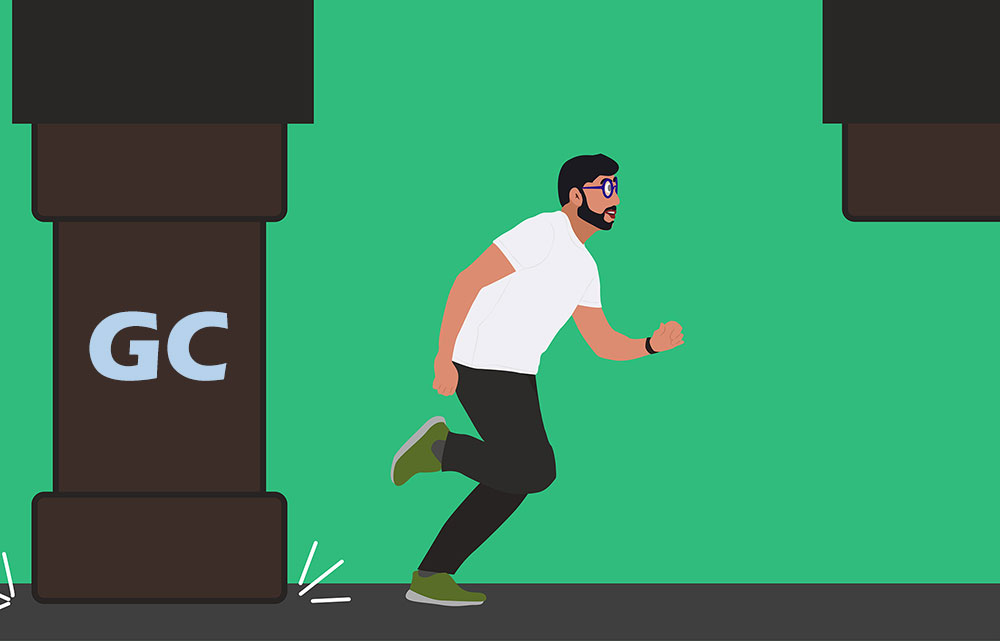 In a .NET application, memory and performance are very much linked. Poor memory management can hurt performance in many ways. One such effect is called GC Pressure or Memory Pressure.

If you’re not familiar with garbage collector fundamentals, I suggest reading this article first.

This article will show 8 techniques to minimize GC pressure, and by doing so, improve performance.

.NET provides a lot of great collections types like List<T>, Dictionary<T>, and HashSet<T>. All those collections have dynamic size capacity. That means they automatically expand in size as you add more items.

While this functionality is very convenient, it’s not great for memory management. Whenever the collection reaches its size limit, it will allocate a new larger memory buffer (usually an array double in size). That means an additional allocation and deallocation.

Check out this benchmark:

In the first method, the List collection started with default capacity and expanded in size. In the second benchmark, I set the initial capacity to the number of items it’s going to have.

By setting capacity, we saved 30% in performance time. In practice, the improvement in performance is probably even greater because BenchmarkDotNet performs GC collections before and after each benchmark run.

I performed another benchmark for Dictionary and HashSet, with similar results:

2. Use ArrayPool for short-lived large arrays

Allocation of arrays and the inevitable de-allocation can be quite costly. Performing these allocations in high frequency will cause GC pressure and hurt performance. An elegant solution is the System.Buffers.ArrayPool class found in the Systems.Buffers NuGet.

The idea is pretty similar to to the ThreadPool. A shared buffer for arrays is allocated, which you can reuse without actually allocating and de-allocating memory. The basic usage is by calling ArrayPool<T>.Shared.Rent(size). This returns a regular array, which you can use any way you please. When finished, call ArrayPool<int>.Shared.Return(array) to return the buffer back to the shared pool.

Here’s a benchmark showing this:

For 100 integers the results are:

Pretty similar, but when running for 1,000 integers:

Much like the ThreadPool with threads, the ArrayPool should be used for short-lived large arrays. For more info on the ArrayPool, read Adam Sitnik’s excellent blog post.

3. Use Structs instead of Classes (sometimes)

Structs have several benefits when it comes to deallocation:

In most cases, you will want to use classes. Use structs when all of the following is true (full guidelines from Microsoft):

In addition, structs are passing by value. So when you’re passing a struct as a method parameter, it will be copied entirely. Copying is expensive and can hurt performance instead of improving it.

Here’s a benchmark that shows how efficient allocating structs can be:

As you can see, the struct allocation is about 6.5 times faster than class allocation.

Finalizers in C# are very expensive for several reasons:

To prove how terrible finalizers can be for performance, consider the following benchmark:

The measuring unit ‘us’ stands for microseconds. 1000 us = 1 millisecond

As you can see, there’s a 1:320 ratio in favor of classes without finalizers.

Sometimes, finalizers are unavoidable. For example, they are often used in the Dispose Pattern. In such cases, make sure to suppress the finalizers when it’s no longer required, like this:

5. Use StackAlloc for short-lived array allocations

The StackAlloc keyword in C# allows for very fast allocation and deallocation of unmanaged memory. That is, classes won’t work, but primitives, structs, and arrays are supported. Here’s an example benchmark:

stackalloc is about twice as fast as regular instantiation. When increasing the number of items from 5 to 100, the difference is even greater – 82ns : 36ns.

6. Use StringBuilder, but not always

Strings are immutable. As such, they cannot change. Any concatenation like str1 = str1 + str2 will allocate a new object. To prevent these new allocations and improve performance, the StringBuilder class was created.

I recently wrote a blog post on StringBuilder performance and found out that things were not as simple as they might seem. Here’s the summary of my research:

About 60% percent of the human body is water. Similarly, about 70% of a .NET application is strings. This makes optimizing strings one of the most important aspects of memory management.

The .NET runtime has a hidden optimization. For literal strings with the same value, it uses the same reference. For example, consider the following code:

It seems like a and b will be allocated to 2 different objects. But, the CLR will allocate just 1 object, which both a and b will reference. This optimization is called String Interning. There are 2 positive side effects to this:

This optimization is done just for string literals. For example, when you write something like this: string myString = "Something". It’s not done for strings that are calculated at runtime. The reason is that string interning is expensive. When interning a new string, the runtime has to look for an identical string in memory to find a match. This is obviously expensive and just not done.

As it happens, you can perform string intering manually. This is done with the string.Intern(string) method. And you can check if a string is already interned with string.IsInterned(string). In very specific cases, you can use this for optimization. Here’s one example:

For 100 items this benchmark will return:

As you can see, this can be very effective when the amount of comparisons is much larger than the number of intern operations. These cases are very rare. If you do consider interning, do some benchmarking to make sure you are actually optimizing anything.

Note that an interned string will never be garbage collected. It might make more sense to create a local string-pool of your own. You can see Jon Skeet’s answer on StackOverflow where he explains this point further and even shows an implementation example.

Memory leaks are a constant troublemaker in any big application. Besides the obvious danger of an eventual out-of-memory exception, memory leaks also cause GC Pressure and performance issues. Here’s how:

Memory leaks are a huge subject. Here are 2 resources you can take advantage of to learn more:

I hope you got value from the mentioned tips and tricks. You probably noticed that all of the above optimizations make use of one or more of these core concepts:

These are not the only concepts in performance optimizations, but probably the most important ones when it comes to GC pressure.