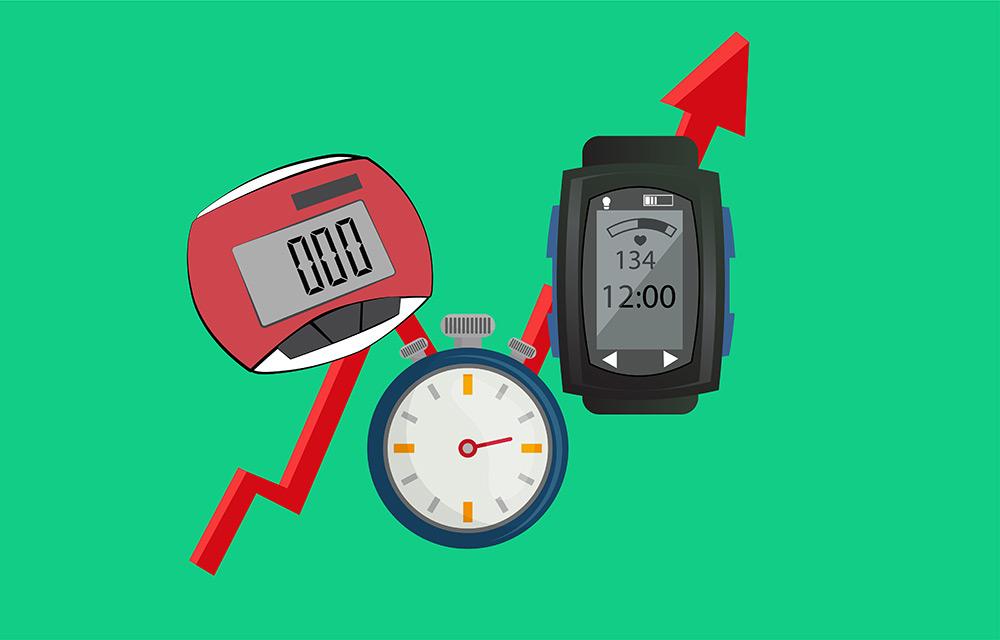 There’s an incredible built-in mechanism in Windows called Performance Counters that allows you to follow a whole lot of useful metrics. It’s easy to use, comes free, and perhaps not used as much as it deserves.

Here are some of the things you can measure with performance counters:

There are hundreds of different counters you can monitor and they come as specific as possible. For example, if you want to find out about Memory Usage of a process, there are counters for Private Bytes, Virtual Bytes, Working Set, Working Set – Private, Gen X Collections, % Time in GC, Large Object Heap Size, and many more. 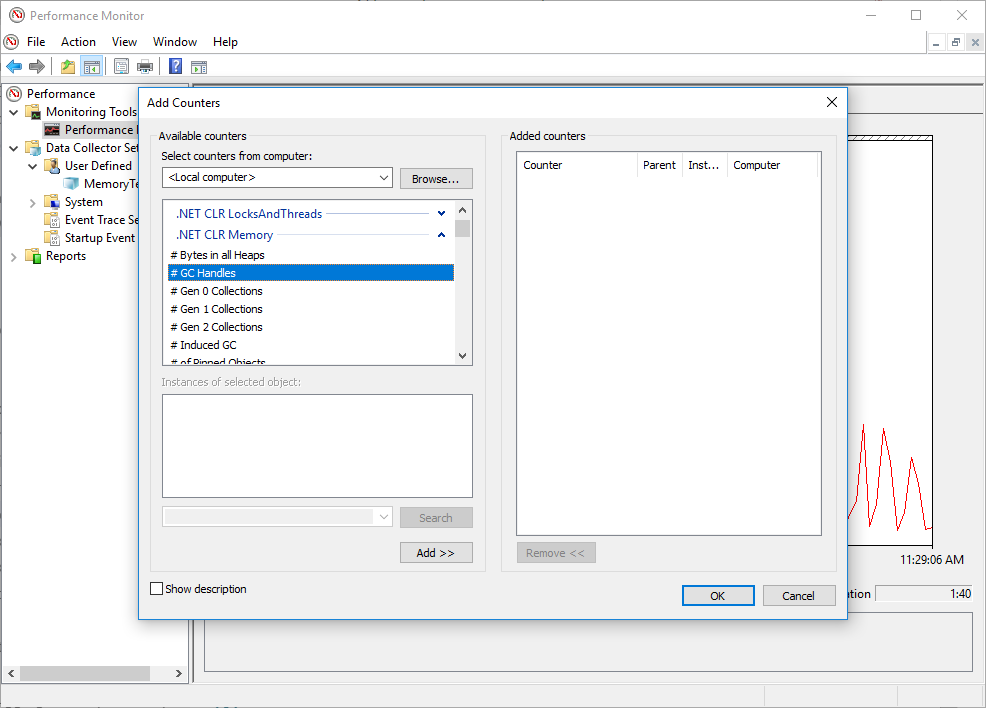 The main tool to monitor performance counters in Windows is Performance Monitor (also known as PerfMon). This tool is already included in Windows and you can find it by typing “PerfMon” in the start menu or even running the “perfmon” command anywhere in the command line.

To see performance counters live, click on Performance Monitor in the left menu. You might see a single default counter % Processor Time already exists. To add more counters, click on the “+” icon. 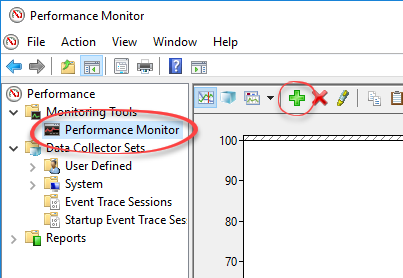 In the dialog that appears you’ll see Categories, Counters and Instances. A category contains many counters. Each counter might contain multiple instances that allow monitoring that counter in more specific detail. 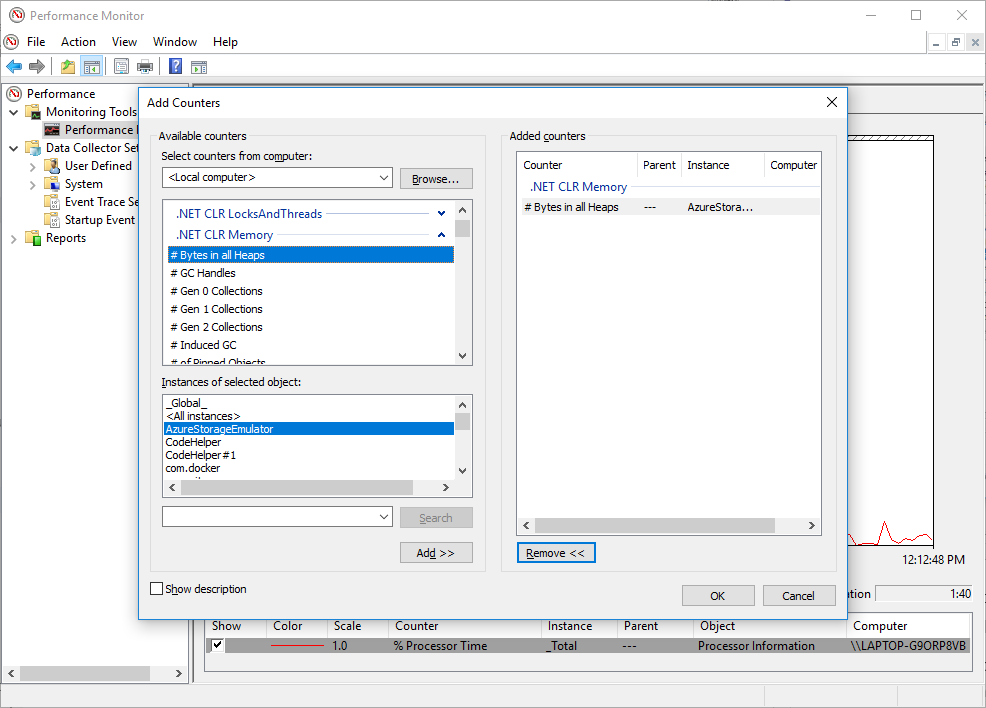 Once added, the new counters will appear in the graph. You can change color, scale, line style, and other properties. 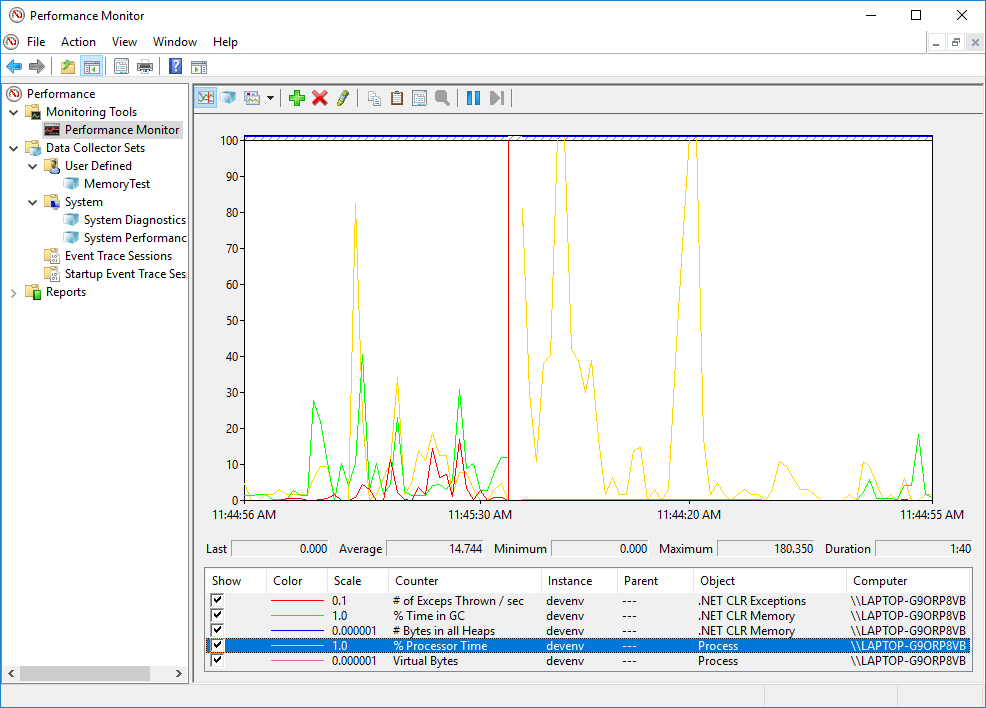 You can also save monitor sessions to a file. To do that, first, add whatever counters you want to be recorded. Then, right-click on the “Performance Monitor” item in the left menu and select New | Data Collector Set. Give it an appropriate name and log directory. 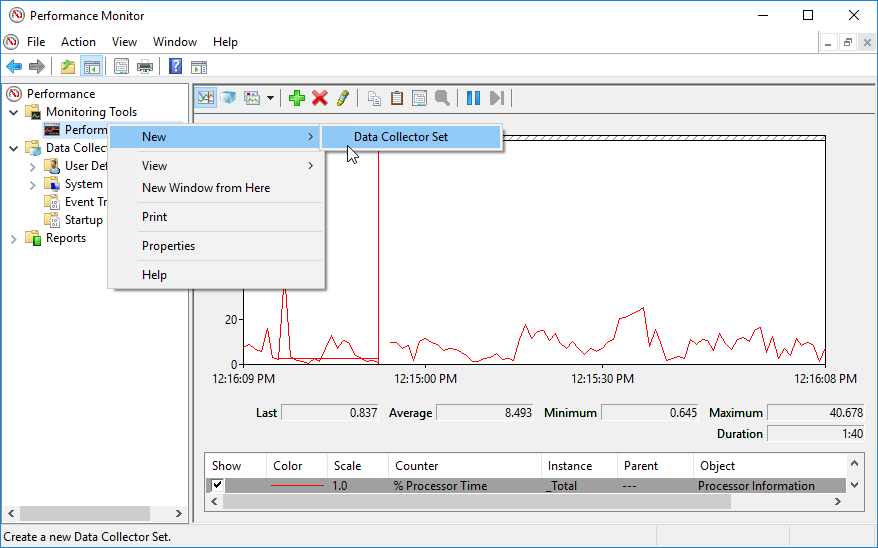 The new set will appear in the left menu in Data Collector Sets | User Defined. To start recording, right-click on the collector set and select Start. To stop, right-click and select Stop. A .blg file will be created, which you can later open in PerfMon.

There are a couple of ways to monitor performance counters in Azure. You can do it with Application Insights and with Azure Diagnostics. Here’s the documentation on setting up the counters on your server.

If you have Application Insights set up, then it collects some counters by default without any additional configuration. You can navigate in Azure Portal to the Application insight resource | Metrics. In there, you’ll be able to view any of the default counters in a graph much like in PerfMon. Just click Add metric and choose the counter. 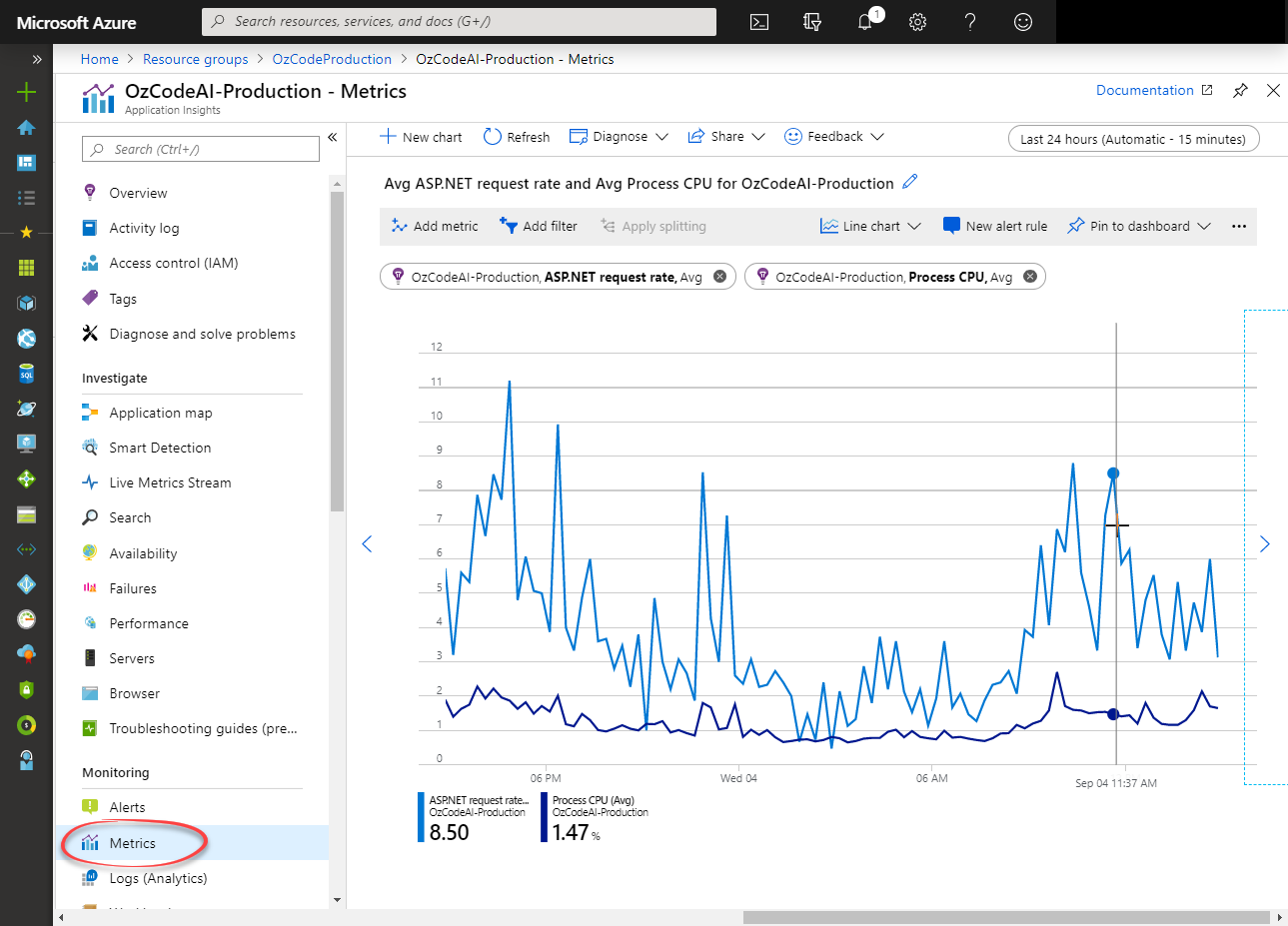 By editing ApplicationInsights.config, you can add whatever counters you want. These might be from the OS, from ASP.NET or your code.

Performance counters support in Linux is still not great but Microsoft is working to better this situation.

Right now, Linux has a Performance Counter equivalent called Perf, which you can use.

There’s also a Microsoft cross-platform tool called dotnet-trace that allows collecting performance counters (and ETW events) on Linux. The collected files can be copied to a windows machine and viewed with PerfView. Unfortunately, PerfView is great for ETW but not as suited for performance counters. Also, copying the data to a different machine kind of defeats the purpose of live monitoring.

As far as Azure, I didn’t check this myself, but according to application insights documentation, performance counters should work just as well when your server is on a Linux machine.

Most valuable counters for debugging

There are different important counters for each type of troubleshooting. On hung applications we’ll check one thing, whereas for a slow performance we’ll check other things. ASP.NET has its own set of counters.

There are 3 main categories for Memory: .NET CLR Memory for managed memory, Memory, and Process.

The following counters will be active only when an ASP.NET application runs on the machine.

For a very useful and explained list of ASP.NET counters, see this article in Microsoft docs.

There’s a pretty straightforward API in the .NET Framework to monitor performance counters yourself with the System.Diagnostics.PerformanceCounter class. Here’s an example:

The above code simply takes the current value of 2 counters and prints them.

The above code creates a new counter if it doesn’t exist. In this case, it’s a single-instance counter. Once a second it updates the counter’s value to the system-time second. Now I can run the code, open PerfMon and add the new counter. The result is this: 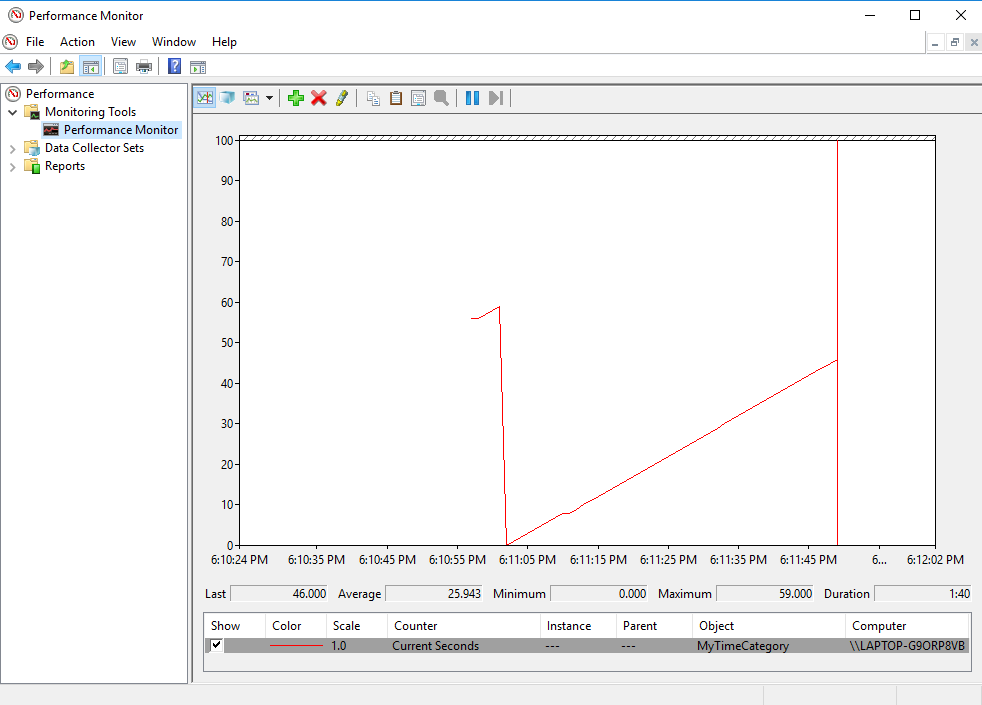 This can be useful in some cases. You’ll be able to add stuff like “Transactions/sec” or “Logged-in Users”. Then, easily monitor your new counters in any environment, including in Azure.

Performance counters are a pretty helpful feature in .NET debugging and monitoring. Although they usually can’t help to find the root causes of a problem, performance counters can point us in the right direction. For example, if you have performance problems, you’ll be able to easily see if they are related to memory, CPU, or too many exceptions.

Thanks for reading and keep following on my new articles.