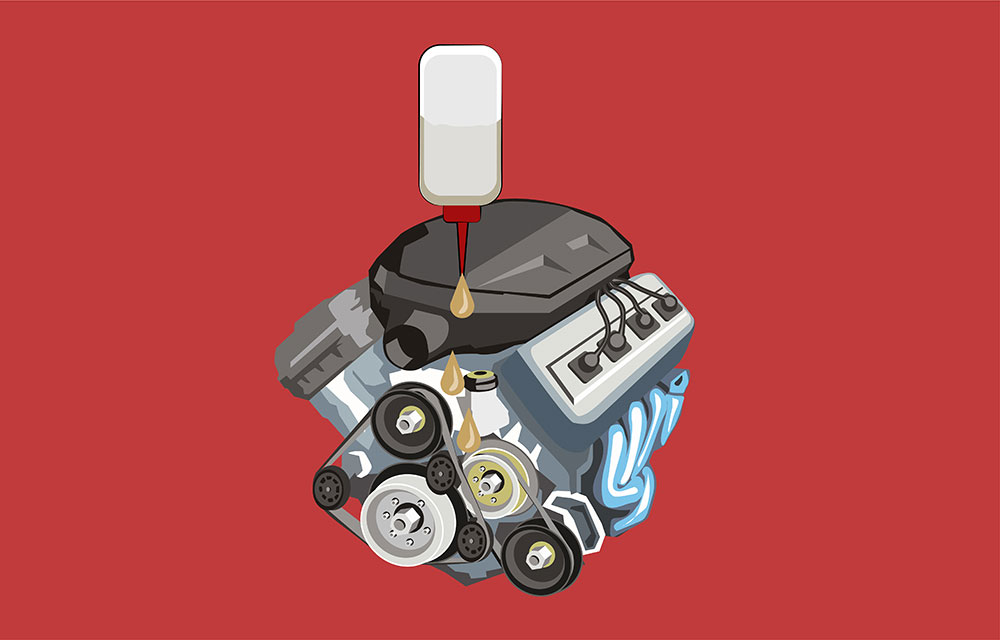 This article will show 10 best practices on dealing with performance problems, starting with when you need to deal with them at all. You will see techniques to detect if a problem exists, find the specific cause, and fix it.

There’s enough to talk about performance in .NET to fill a book and actually, several books already exist on the subject [1] [2]. This article is a bird’s eye view on the matter of performance. I’ll show general techniques and strategies to approach problems, introduce you to the most useful tools, and point you in the right direction.

When to worry about performance

Did you ever hear the quote Premature Optimization Is the Root of All Evil? That’s a quote by Donald Knuth (kind of) that’s meant to say – don’t worry about optimization before there’s a problem.

This approach is often the right one to take. Micro-optimization, or worrying about performance during development can be a waste of time. Most likely the improvement you make won’t be in the critical path, will be negligible, or worst of all increase the complexity and readability of your code for a minimal advantage.

I very much agree with this approach, with some caveats. Those are:

In most applications, performance issues aren’t going to be a problem. There are specific scenarios when you absolutely do need to worry about performance. Those are:

Let’s continue to some best practices.

When dealing with performance, unless you measure it, you’re in the dark. There are way too many factors in a .NET program to assume anything without measuring.

For development or testing, measuring execution time might be enough. When facing a specific performance problem, you can and should measure more metrics. With various tools, you can measure an abundance of information like CPU usage, % time waiting for GC, exception counters, time spent in a certain method and more. We’ll see how further on.

For a specific problem, you mostly should measure the smallest part that causes the problem. For example, suppose I have an unexplained delay when clicking a button. I will start measuring as closely as possible before the button is hit and stop measuring as soon as the delay is over. This will pinpoint my investigation just to the problematic delay.

Measuring performance is best done as closely as possible to a production environment setting. That means measuring in Release mode and without a debugger attached. Release mode ensures the code is optimized, which can make a big different in performance for specific scenarios. Similarly, attaching a debugger can also decrease performance.

Having said that, in my experience there’s a lot of insight to be had when measuring in debug mode as well. You just have to keep in mind some of the finding may be due to code optimization and an attached debugger

Optionally, you can measure the part of code after a certain warmup period. That is, run the code several times before starting to measure. This will make sure JIT compiling is not included in the measurement and possibly that the code and/or memory are in CPU cache.

Here are some ways you can measure performance:

A performance profiler allows you to record a part of your program runtime, save it as a snapshot, and investigate it. You will be able to see:

Here’s a screenshot of dotTrace while analyzing a snapshot: 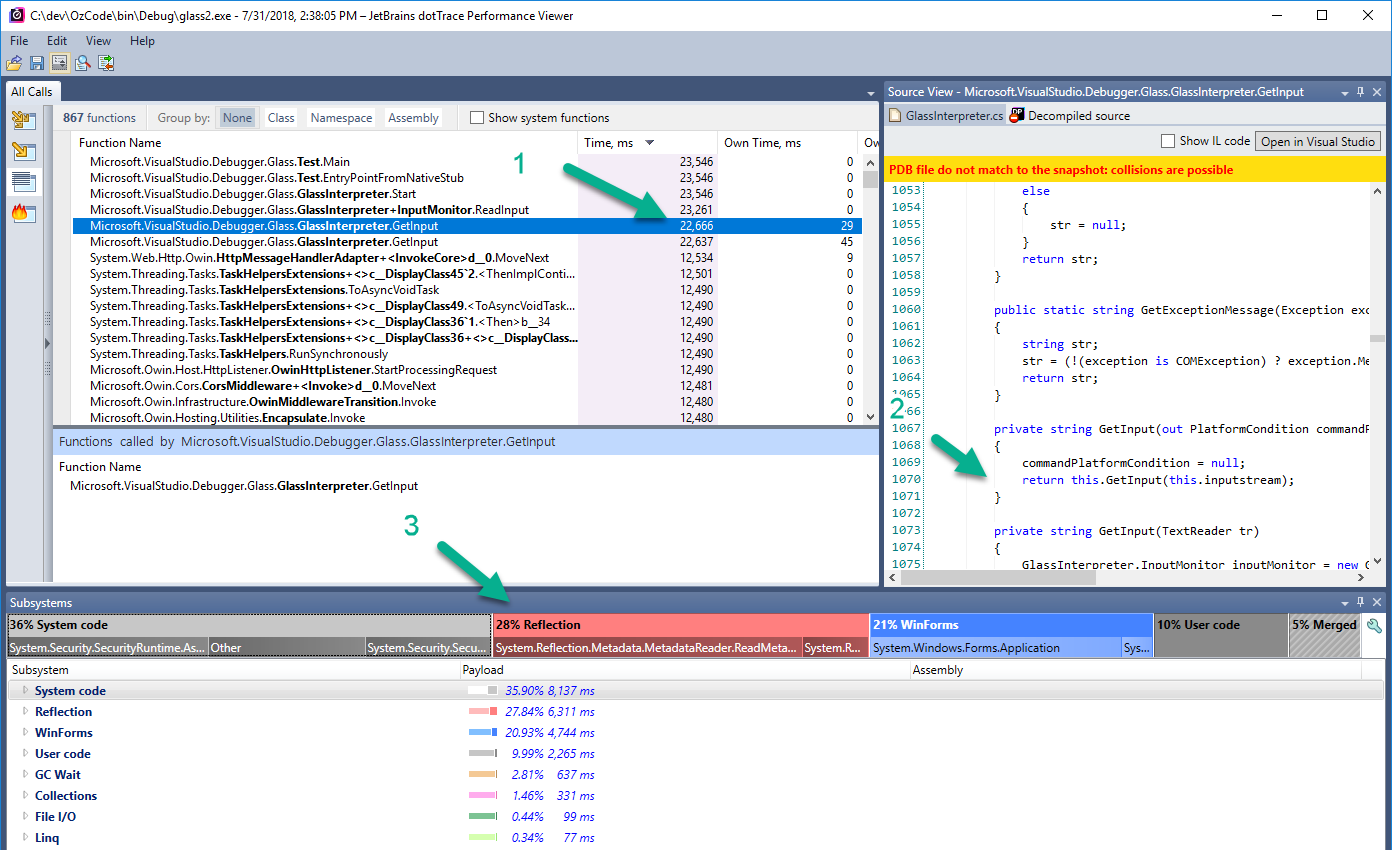 Here’s what we see:

We can further explore the methods GetInput called in another screen:

Here we see that GetInput called another overload of GetInput, which called DoEvents, which called Event and so on. We can see how much time each individual method took in milliseconds and percentage.

Garbage collection is very much tied to performance. I daresay that the most important thing to understand in a .NET process performance-wise is the GC.

While allocations are very cheap, GC is expensive and we should constantly keep an eye on it. Specifically, we should be looking at 2 metrics: % time spent in GC and Gen 2 collection frequency. Here’s why:

We have 3 prime directives in dealing with the GC:

There are many techniques and best practices to achieve that. In fact, I recently wrote the article 8 Techniques to Avoid GC Pressure and Improve Performance in C# .NET which will help you do just that.

Besides the techniques and optimizations I describe in the linked article, you should always be measuring GC behavior. Here are some ways you can measure GC behavior:

.NET code is compiled to MSIL code instead of native code. This is the same trick used by Java JVM that allows Java to run everywhere. This magic happens with just-in-time compilation (JIT).

The JIT compiler converts MSIL code into native code the first time a method is called. This is pretty fast, but can still cause performance issues, especially at startup. Usually, the JIT is not going to be a problem and you won’t need to optimize anything. But, in some cases, you might want to tweak the JITter.

There are 3 modes to consider for JIT:

When talking about performance in .NET, there are some tools that have to be mentioned.

For .NET Core, on non-Windows environments, use dotnet-counters as an alternative to PerfMon for performance counters. Similarly, dotnet-trace is an alternative for ETW logs. I didn’t try those tools, so please report in the comments on your experience if you did.

6. Save execution time with Caching, but carefully

One important concept to improve performance is Caching. The basic idea is to reuse operation results. When performing some operation, we will save the result in our cache container. The next time that we need that result, we will pull it from the cache container, instead of performing the heavy operation again.

For example, you might need to pull product recommendations from the database. When doing so, you can save it in your in-memory cache container. Next time someone wants to view that same product, you can pull it from memory, saving a trip to the database.

Sounds like a great solution on first glance, but nothing is so easy in software engineering. Consider these possible complications:

I mentioned in-memory caching, but you can also use persistent cache (file/database) or distributed cache with a service like Redis. Those will be slower but can solve a lot of the mentioned problems.

To summarize, caching is a very powerful tool that can considerably improve performance. It also comes with a price, which you should carefully consider when implementing. For more information about caching, you can read my article Cache Implementations in C# .NET

When a user interacts with UI, any response under 0.1-0.2 seconds feels instantaneous [1] [2]. 1 second is the limit for the user’s flow of thought to stay uninterrupted. Anything more than 1 second, the user feels they are no longer in control of the interaction.

Here are some rules of thumb in regards to UI performance:

8. Optimize only the critical path

When solving a specific problem, it’s important to know where to put in the work. In other words, you can spend a lot of effort fixing something that doesn’t make an effect.

The critical path is an important concept in performance. It’s the longest sequence of activities in a task that must be completed for the task to be ready. It’s a bit confusing, so I’ll give an example.

Suppose you work on a web application that does image filters. When the user clicks Filter you do 3 operations simultaneously:

Suppose that you can easily optimize the backup operation to take 5 seconds instead of 10. Should you do it? Well, there’s no point. Since the operations are done simultaneously, the operation will still take 25 seconds. The only operation that’s worth optimizing is the critical path, which is applying the filter.

Hot paths are code sections in which most of the execution time is spent. They often execute very frequently.

While micro-optimizations are usually unnecessary, hot paths are the one place where they are very helpful. There are lots and lots of optimizations you can do. Here are some of them:

There are several patterns .NET that you should avoid as much as possible. The following are proven performance offenders:

A big part of almost any application is the Database. DB optimizations are obviously important, but they aren’t directly related to .NET. It’s a huge subject on its own, which I’ll leave for another post.

.NET is elusively simple, which gives the impression you can do anything without repercussions. While that’s true to some extent, you can easily get into trouble when you don’t have in-depth knowledge. Moreover, it can go unnoticed until you’ve scaled to a million users and it’s too late.

The important things that can get you into trouble when your application has grown are those that are hardest to fix. It might be fundamentally bad architecture, incorrect memory management, and badly planned database interaction. Just keep in mind that your application might grow huge or wildly successful with a billion users. Cheers.